Covid-19: Homeless people in Muizenberg are afraid and anxious

“No one has talked to us about the virus. We don’t know what it can do to us. All we know is that you must wash your hands.” 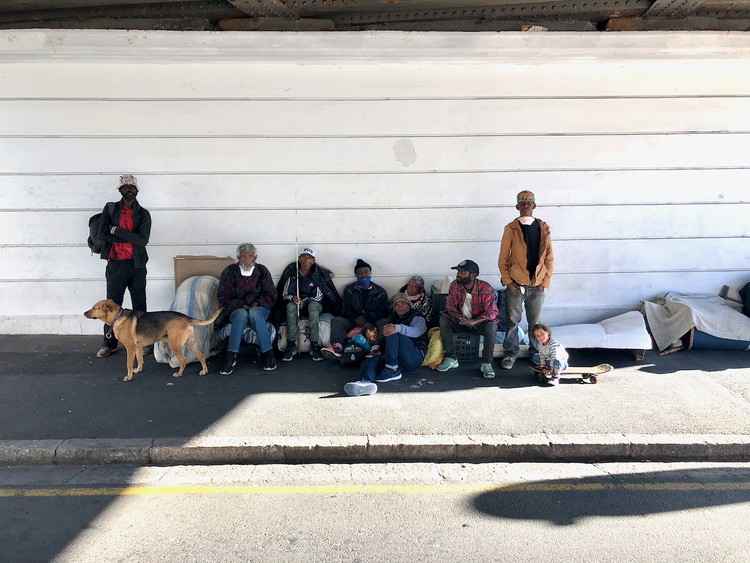 A community of about 25 homeless people who live under Muizenberg bridge say they don’t know what to expect during the 21-day national shutdown to mitigate the spread of Covid-19. Photo: Lucas Nowicki

A community of about 25 homeless people who live under Muizenberg bridge say they don’t know what to expect during the 21-day national shutdown to stop the spread of Covid-19.

In his address on Monday, President Cyril Ramaphosa announced that temporary shelters would be provided for homeless people during the lockdown period.

On Friday morning, local police told the homeless group that they would get clarification about the plans for temporary shelter if they waited at Muizenberg Park. Most then reloacted to the park.

Many feared that they would be locked up somewhere, but they still wanted to be off the streets during the lockdown. Some thought they were going to be moved to Pollsmoor prison.

Ebrahim Ajam, 65, has lived under Muizenberg bridge for ten years. He used to work in construction. He said that the lack of clear information from the City and the police was making him anxious about what will happen to them. He only found out about the lockdown on Thursday.

“No one has talked to us about the virus. We don’t know what it is like, or what it can do to us. All we know is that you must wash your hands,” said Ajam.

Mikhaila Dirks, 27, has lived on the mountain and under the bridge since she was 14. She said she was “very lucky” to have managed to find relatives to look after her seven-year-old daughter in Mitchells Plain during the lockdown period, but she said that the community was concerned for the safety of the children who did not manage to find a home for shelter these next 21 days.

Mayco Member for Community Services and Health Zahid Badroodien said that the City is “establishing temporary accommodation for all homeless residents during the national shutdown and the immediate foreseeable future”.

Badroodien said the City is currently engaging with “various interested and affected parties working in the street people sector”.

He said that they have identified five sites which are being prepared to make space available for homeless people.

Ward 64 Councillor Aimee Kuhl (DA) said that there would soon be more clarity on where and when the homeless community will be moved.