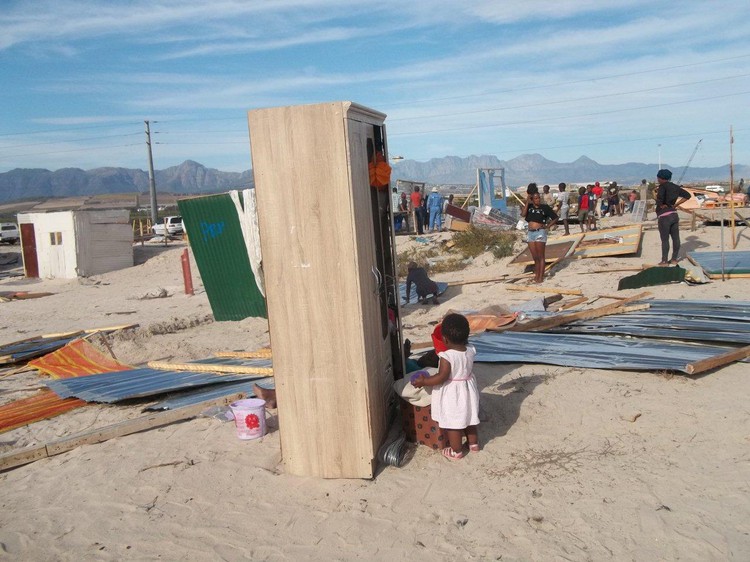 The City of Cape Town Shack has been demolishing the shacks of people who occupied land in Empolweni, Khayelitsha. Photo: Vincent Lali

A video apparently showing a City of Cape Town law enforcement officer pepper-spraying Axolile Notywala, the head of the Social Justice Coalition (SJC), while he was detained in the back of a van, has been posted to Twitter by Notywala.

The event occurred on Saturday as the City once more took steps to demolish shacks at the Empolweni informal settlement in Khayelitsha, a policy that has been vehemently opposed by the SJC and other housing activist organisations. Demolitions also took place on Thursday after shack dwellers occupied City-owned land a few days earlier.

Leader of the Khayelitsha Community Network, Ntsiki Dlulani, said that frightened shack dwellers called her and and Notywala to say that officials were about to demolish their shacks.

Notywala posted a video of himself and an unidentified resident sitting in the back of a van outside Harare Police station in Khayelitsha.

I just got pepper sprayed by a @CityofCT law enforcement officer with no identification. The person I’m with in the can was asking for the officer to open so he can pee. They said we have no rights. I challenged him on that and he pepper sprayed us pic.twitter.com/RybJXamqOr

Message posted by Axolile Notywala posted on Twitter (which also contains a video).

In the video, Notywala struggles to keep his eyes open as they produce tears. He is also seen coughing and sniffing. “I can’t see. My eyes burn,” he says

Notywala describes how he was arrested. “All we were asking was for this gentleman to be allowed to pee,” he says.

At the time of publication activists were reporting that Notywala and others who were arrested would be released on Saturday evening with a warning.

Heavy rain is expected in Cape Town on Saturday night.