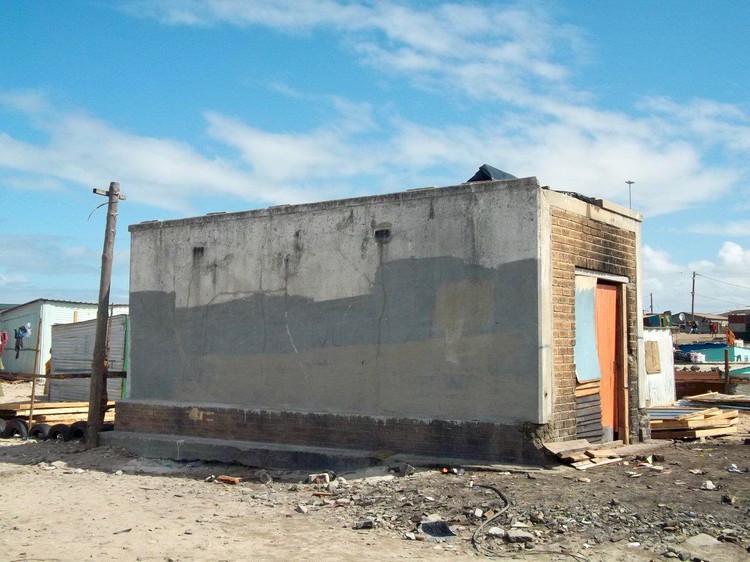 A brick shelter where some of the 50 people are seeking shelter after being left homeless after the City of Cape Town demolished their shacks in Khayelitsha in the midst of the Covid-19 pandemic. Photo: Vincent Lali

About 50 former backyarders are now sleeping in a small brick structure and a community church in Khayelitsha. In the midst of the pandemic and the national lockdown to disrupt the spread of Covid-19, their shacks in Empolweni informal settlement have been demolished several times by City law enforcement. Each time the shack dwellers have rebuilt.

Community leader Miselo Qika said, “The residents can’t go back to where they used to rent backyard shacks because the lockdown prevents them from working and making money for rent.”

According to Qika law enforcement also seized their building materials so they cannot rebuild their shacks either.

“We phone the City of Cape Town to ask officials to give us back our building materials, but they can’t help us because of the lockdown,” said Qika.

She said they were hungry and needed food. “We want tinned stuff because we can’t buy ourselves cooked food from informal traders as they are not allowed to sell,” she said.

“Law enforcement broke our water buckets, so we can’t even collect water from a City truck to wash,” she said. They also want soap and hand sanitisers, she said.

“I have not washed my body for three days. I smell of sweat and teargas,” said Nonkululeko Mahashana. Currently, she rinses her mouth and washes her face and hands at a communal tap in neighbouring Zweledinga informal settlement.

The homeless residents are now sleeping at a community church and some in a nearby brick structure.

“Initially we separated each other with chairs to social-distance, but eventually the cold forced us to move closer to each other for comfort,” she said.

She said their blankets and belongings were drenched by the rain on Saturday night. “I borrowed a damp blanket and huddled together with other residents for comfort,” said Mahashana.

Zukiswa Qezo, of the Khayelitsha Community Network, said the organisation intends to feed the residents until they get an interdict against the evictions. She said she was worried about Covid-19 spreading among the people huddled in the brick structure.

He said the Social Justice Coalition and Gift of the Givers had stepped in to help the homeless residents.