Enduduzweni Centre members celebrate as their electricity is reconnected 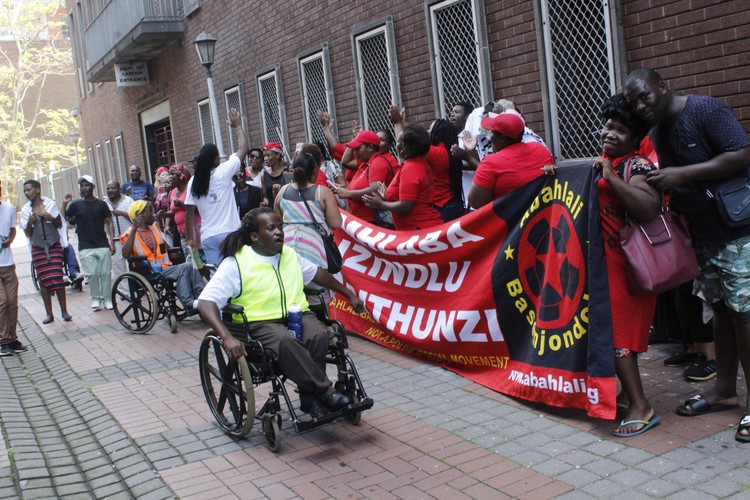 Members of the Enduduzweni Centre for the Disabled in Umlazi celebrated outside the Durban High Court on Tuesday after their electricity was reconnected. Photo: Nomfundo Xolo

Members of the Enduduzweni Centre for the Disabled in Umlazi celebrated outside the Durban High Court on Tuesday, after their electricity had been reconnected following a court order against the KwaZulu-Natal Department of Social Development and the eThekwini Municipality.

The centre had been without electricity for two weeks, with residents using fire to prepare meals. They say their training stipends from the department have also been terminated.

With support from Abahlali BaseMjondolo and the Right to Know Campaign, the residents approached the Legal Resources Centre (LRC) for help getting the eThekwini Municipality to reconnect electricity.

The LRC’s Thabiso Mbhense says the disconnection of power was another ‘eviction tactic’, after about 40 of the residents in the centre were given retrenchment notices in 11 October 2018 during a year-long battle. The department says the centre was established as a training centre for people with disability to produce cane furniture, but this is no longer in operation.

“They are taking advantage of the disabled people. It is a clear indication that the municipality and the Department of Social Development want these people out. We will not let them further manipulate the disabled people of Enduduzweni,” says Mbhense.

Mbhense says after the Municipality and the Department of Social Justice had been served with the court order, the electricity was reconnected on Monday. The LRC then withdrew the case and filed a new application to address the termination of the residents’ stipends.

Themba Shiba, leader of African Nduduzweni Organisation for the Disabled, which represents the residents, says they have been mistreated for years by the municipality and the Department of Social Development.

“But this is the last time they get away with it. We have taken a firm stand also using the law. Now that electricity is back, we demand the return of our stipends until March 2019 as agreed. They have at least seven days to respond to this order,” he explained.

Shiba says although difficult, regaining ownership of the centre is a necessary battle. “We will not be removed from the centre that has become our safe haven for years to make way for greedy politicians that want to discard us like we are useless in the community.”

When asked why the electricity in the centre had been cut-off, eThekwini Municipality spokesperson Msawakhe Mayisela said, “The building is owned by the Department of Social Development and they instructed the Municipality to disconnect and remove meters because the building is condemned and poses a health risk to people.”