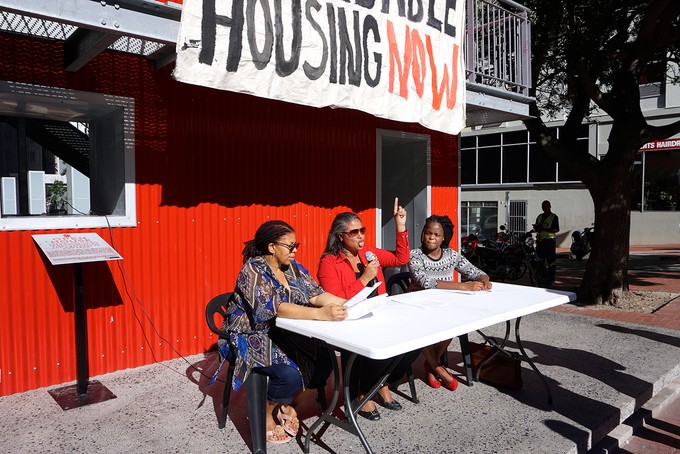 Applicants Thozama Adonisi and Sharone Daniels, and NU lawyer Mandisa Shandu speak to press and supporters after a settlement on the Tafelberg property in Sea Point became an order of court.
Photo: Naib Mian

Sale of the Tafelberg school site in Sea Point was stopped after an agreement between lawyers for the activist organisation Ndifuna Ukwazi (NU) and the provincial government became an order of court today in the Western Cape High Court.

NU together with a campaign called Reclaim the City objected to the sale of the land from the Province to the Phyllis Jowell School. It wants the Tafelberg property to be used instead for affordable housing.

In a press statement, Reclaim the City wrote, “In effect, Province has admitted that it failed to comply with legal requirements in the sale of state land,” namely the Western Cape Land Administration Act, which requires the Premier to publish notice of the proposed sale and provide 21 days for public comment. Reclaim the City amongst others originally opened the case to interdict transfer of the property on 11 April, citing this as one of the responsibilities the province failed to adequately perform.

Plans to sell the property will therefore be reopened to a 21-day public comment and objection period within ten days of today’s order. Within a month after the consultation period, the provincial cabinet will determine whether the sale should continue or not and must provide reasons if the sale continues.

The court order came a week after NU lawyers accepted an offer made by Premier Helen Zille, the provincial Department of Transport and Public Works, and the Phyllis Jowell School.

“We are committed to ensuring that anyone who seeks an opportunity for comment should be able to have it taken into account, before the provincial government makes a rational decision about how best to utilise its assets to the best advantage of citizens,” Siphesihle Dube, spokesperson for the Minister of Transport and Public Works, wrote to GroundUp. This statement was also made in a newsletter published by Premier Helen Zille today.

Following the settlement, Reclaim the City wrote, “This means that our campaign must intensify.”

It further stated: “We must ensure that the objection period is not simply a box-ticking exercise, but a genuine opportunity for meaningful participation.”

Reclaim the City Spokesman Kopano Maroga said, although the settlement was a victory in terms of “historic public engagement” from the province, it fell short.

“The fact that there isn’t any kind of substantive textual agreement to creating affordable housing in the city centre for working class people – it falls very very short,” he said.

Maroga said moving forward, Reclaim the City is using a team of researchers to come up with potential plans and feasibility studies. It will present these to the province. The organisation hopes to use the Tafelberg dispute to create a precedent for public land being used in service delivery.

“It’s being done elsewhere. It needs to be done here,” she said. “Otherwise the status quo, which is the apartheid city, is what will continue to be the Cape Town that we should be claiming as ours.”

NU’s Associate Director, Zackie Achmat, said this was the first case of its kind dealing with urban land.

The Department of Transport and Public Works did not take an active stance on the future of the site, but affirmed the provincial stance on affordable housing cited in Zille’s letter.

“The Western Cape Government remains bound by our Constitutional mandate of providing access to adequate housing, within available resources and the constitutional and legislative environment,” Dube wrote.

Although the case has been settled in court, Tafelberg’s future remains uncertain. “The matter, broadly speaking, is by no means concluded,” Dube said.