Court rules that Glebelands witnesses will testify in camera

Harrowing testimony of witness to shootings 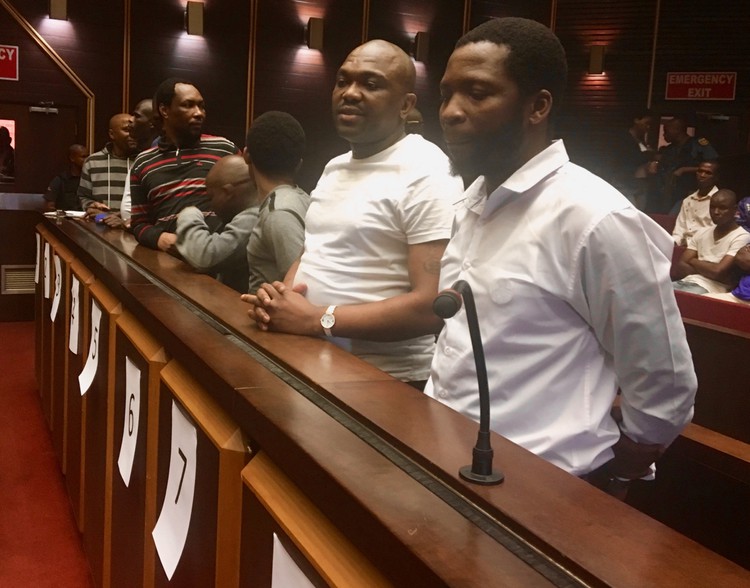 The Glebelands Eight are facing charges of murder and attempted murder in the Pietermaritzburg High Court. Photo: Nompendulo Ngubane

The four main state witnesses in the trial of the “Glebelands Eight” can testify in camera, the Pietermaritzburg High Court ruled on Monday.

The men will testify in front of an empty gallery with only the media and accused present. The media may not mention the names of the witnesses, ruled Judge Nkosinathi Chili.

The eight accused pleaded not guilty on 27 August when the trial started. They are facing nine murder and seven attempted murder charges. Some are also charged with possession of illegal firearms and racketeering. The crimes took place between August 2014 and March 2016. The first accused is Bhekukwazi Mdweshu, a former Durban Central police officer. His co-accused are Khayelihle Mbuthuma, Vukani Mcombothi, Eugene Hlophe, Mbuyiselwa Mkhize,Ncomekile Ntshangase, Mondli Mthethwa and Bongani Mbhele.

First to take the stand on Monday was Bhekumuzi Skhakhane of the Provincial Crime Unit in Durban. He told the court that it is important that witnesses are protected. Skhakhane said during his interviews with the witnesses they had told him they were scared of testifying in an open court.

Skhakhane described how three other witnesses — Phumelele “Godola” Ndlovu, Sipho Ndovela and Princess Sibiya — had been murdered, one of them on the premises of the Umlazi police station.

The first of the four in camera witnesses began his testimony on Monday. The 56-year-old man was visibly frightened and could not look at the accused, who listened attentively while he testified. He was first cross-examined by Dorian Paver, the state prosecutor. He is testifying with regard to the charges faced by Mdweshu, Mbuthuma, Mcombothi, Hlophe, Mkhize and Ntshangase.

He said he had been living in Block R at Glebelands hostel since the early 1990s. He was on the hostel committee. He described what happened on 19 August 2014 when there were attempts on the lives of Bongani Mthembu, William Mthembu and a third man who GroundUp is not naming. (The Mthembus were later killed in subsequent attacks.)

“[The third man] had come into [my] tuck shop. I was about to sell him what he wanted. A man carrying a big gun wrapped in a towel came inside my shop. He started shooting. I managed to hide by the door. [The third man] was shot in the right thigh,” testified the man. He said he could not identify the shooter.

“I was not shot but all the pieces of the door were all over my face,” said the witness. He said the gunshots continued for half an hour. “There were sounds of sirens from the cars outside. I went to Wentworth hospital and [the third man] was already there,” he said.

Martin Krog, a lawyer for the accused, asked the witness if it was a mistake that a statement taken afterwards said that he had been shot.

“It could have been a mistake, I was not shot,” said the witness.

The second in camera witness will testify on Tuesday.

CORRECTION: The article originally said that both Mthembus and the third man were later killed. Only the Mthembus were killed. We regret the error.

CORRECTION: The article originally said that the witness would continue testifying on Tuesday. In fact he finished his testimony on Monday.