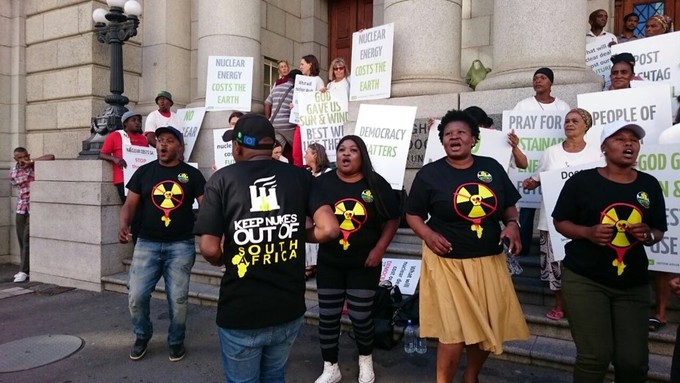 The Minister of Energy Tina Joemat-Pettersson has been ordered by the Western Cape High Court to pay punitive costs including the costs of four counsel for Earthlife Africa and the Southern African Faith Communities Environment Institute (SAFCEI) after the state brought forward new evidence minutes before the case was set to begin.

A court orders punitive costs usually when it is dissatisfied with the conduct of a litigant. This is rare and is considered a strong rebuke.

The respondents in the case are the Minister of Energy, the president, the National Energy Regulator of South Africa (NERSA) as well as two representatives from Parliament.

Yesterday, the case began with a postponement until February 2017, as it was revealed mere minutes before the hearing was to begin that the Minister had made a new nuclear energy determination – replacing a decision that was gazetted last December.

Part of the relief sought by Earthlife and SAFCEI was for the old decision to be declared invalid. They also want the court to declare invalid the agreement between South Africa and Russia, as well as the tabling in Parliament of the deals with the USA and Korea.

The new decision now states that Eskom, not the Department of Energy - as was the case in the old determination - will be the procurement agency for 9,600 megawatts of nuclear energy.

“Despite it being signed on 5 December 2016, the Court was not informed thereof and neither were the applicants – until literally minutes before the hearing was to begin. The Court stressed in its judgment that there was no evidence presented to the court explaining how this determination came about, when it was decided upon and the processes leading thereto, despite the Determination apparently having been made more than a week before the hearing,” says a statement issued by Earthlife and SAFCEI.

The South African Renewable Energy Council (SAREC) has also expressed concern over the new determination, saying that it was “seemingly rushed through” on the basis of “the very outdated Integrated Resource Plan published in 2010”.

“We are further disheartened by Eskom’s Acting CEO’s simultaneous announcement that the utility will release a nuclear Request for Proposals as soon as the determination is gazetted,” says Brenda Martin, Chair of SAREC in the statement.

“SAREC believes that this irrational behaviour fans the flames of suspicion as to the real motives behind the nuclear campaign. Facts, logic and basic financial prudence simply do not support this determination,” says the statement.

Earthlife and SAFCEI wanted the request for proposals to be halted until the court case was finalised. However, the court ruled that Eskom was allowed to go ahead with the process.