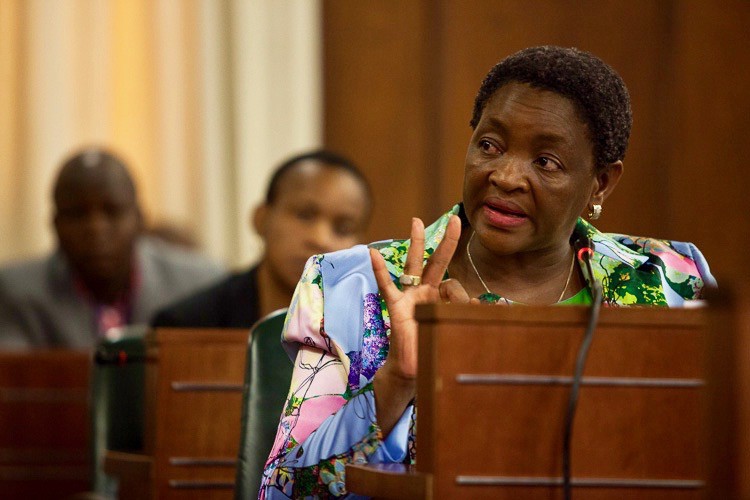 On Thursday, judgment was handed down in the Constitutional Court in the Black Sash Trust vs Minister of Social Development and others case. Justices Froneman, Madlanga, Cameron, Nkabinde and Khampepe presided.

The judgment was read by Justice Froneman and dealt with the particulars of the costs of the case. In question was whether Minister Bathabile Dlamini should be held personally responsible for the costs. Dlamini was not present in court.

The Court unanimously ordered that all parties must “within 14 days” report to the Court on whether they have agreed to a process of negotiating responsibility for the legal costs.

The case follows a judgment on 17 March which extended an unlawful contract with Cash Paymaster Services (CPS) by a year so as to ensure the uninterrupted payment of social grants to the country’s 17 million beneficiaries. The court had ordered Dlamini to show why she should not “pay the costs of the application out of her own pocket”.

A “personal cost order” from the court depends on whether or not the Court finds that Dlamini acted in “bad faith” with respects to the “predicament this country was faced with” regarding the distribution of social grants, Froneman explained. The court concluded that it did not have enough evidence yet to confirm bad faith.

Dlamini filed an affidavit at the end of March dealing with the personal costs order, in which she, according to the latest judgment, “sought to place the blame for what went wrong on officials” of the South African Social Security Agency (SASSA).

SASSA CEO Thokozani Magwaza sent a letter to the Court on the 3 April in response, saying that Dlamini’s depiction of events was “inaccurate”.

The judgment questioned whether Dlamini was “made aware of the risk [of a personal costs order]”, and stated that she “should be given an opportunity to advance reasons why the order should not be granted”.

The judgment then went into an analysis of the conditions for an order to be made for personal costs, and if the minister acted in bad faith.

Allegations regarding Dlamini’s “bad faith” or establishment of “workstreams” were illustrated through several affidavits filed by Magwaza and Zane Dangor, director general of SASSA. These allegations were found to be “serious” but currently “untested”.

“If it is correct that the Minister appointed the members of the work streams and that they reported directly to her in contravention of governance protocol, then her failure to disclose this to the court bears strongly on whether she has acted in good faith or not,” Froneman read.

However, “this court cannot make an order adverse to the Minister on the basis of allegations that are untested and which she has not had an opportunity to challenge.”

The court ordered that an “inquiry” be set up and a “referee” be appointed to investigate the allegations laid against Dlamini to “resolve the issue” of bad faith.

According to Section 38 of the Superior Courts Act, the Constitutional Court can refer any matter that requires specific technical or extensive investigation to a referee appointed by the parties involved. Section 38 further stipulates that the findings of a referee appointed by parties involved will “have effect as if it were a finding by the court”.

Counsel representing the Black Sash Trust, Nomonde Nyembe, told GroundUp after court adjourned: “I don’t think we’re done here yet. I have no doubt that an inquiry will be lengthy.”

The court did not stipulate who the referee would be or what process an inquiry would follow. The court did state that “failing agreement, the court will issue directions determining the process”.

“People’s needs must be responded to” said Froneman. “Accountability and responsiveness are founding values of our democracy. The issue of the Minister’s conduct surrounding the work streams needs to be resolved before coming to a final decision.”

Lynette Maart, Black Sash spokesperson, said: “We hope this will give clarity in future situations about where accountability is held. The Minister, the CEO and the Director General of SASSA – those three spheres need to be clarified. Who is accountable for what?”