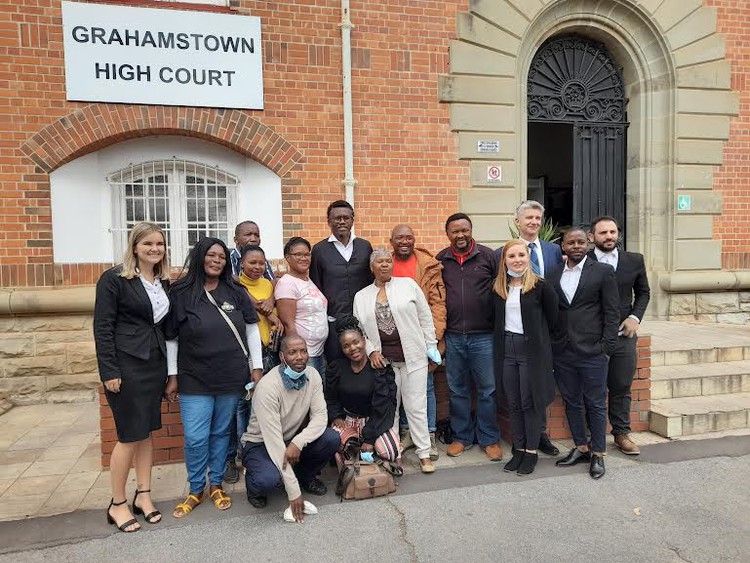 Lawyers and parents of children affected by the lack of textbooks and stationery, outside the Grahamstown High Court on Tuesday. Photo: Lucas Nowicki

The Grahamstown High Court has ordered the Eastern Cape Department of Education to provide all outstanding textbooks and stationery to public schools across the province by 30 March.

The order was handed down by Judge Murray Lowe on Tuesday afternoon.

Late last month, the Legal Resources Centre (LRC), representing education organisation Khula Community Development Project and children and parents from across the province, brought the urgent application to the court. This came after the Eastern Cape Department of Basic Education failed to deliver textbooks and stationery to over 3,000 schools in the province because of “unprecedented budget shortfalls”.

The department wanted to be given till the end of April for the delivery of textbooks.

The education department must submit an affidavit within seven days to update the court and the applicants on progress.

If the LRC and education activists are not satisfied with the progress in the submitted affidavit, they can file an affidavit within ten days of the department’s report.

The order also directs the provincial department of education to submit another affidavit before 30 September 2022 to show progress in planning to make sure that “every learner at every school in the Eastern Cape is provided with the full complement of stationery and textbooks prior to the commencement of the 2023 schooling year”.

The department was ordered to pay legal costs.