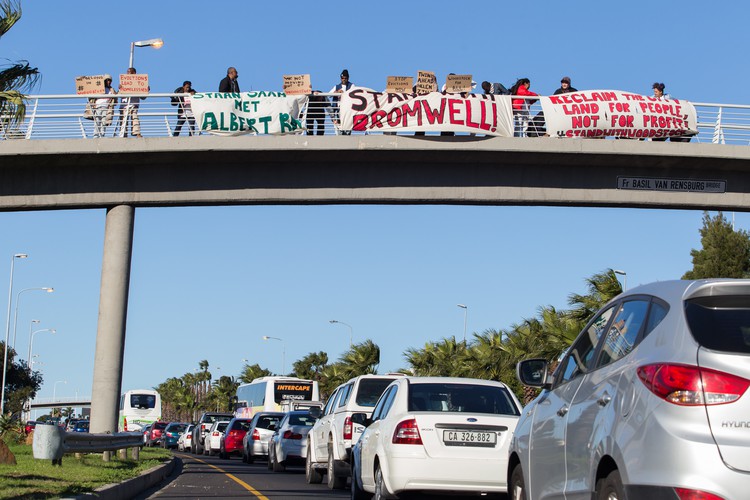 Relaim the City supporters hold a picket against evictions at the Searle Street bridge in Cape Town. Photo: Ashraf Hendricks

The Cape Town Magistrates’ Court has instructed the City of Cape Town to submit a report for alternative accommodation for a group a families facing eviction in Woodstock. Mark Owen, the lawyer representing the families, had asked the court to make this order.

Over 50 people living in a block converted into apartments on Albert Road were served with eviction notices in March and April to vacate their homes for not paying rent. But the residents have accused the landlord, known only as Mr Patel, of neglecting to maintain the property. They say they stopped paying rent after their water was cut more than a year ago due to non-payment. The landlord’s lawyer, Ahmed Ebrahim, has disputed their version. Many of the households still don’t have water.

Owen said that he asked for the court’s assistance after the City failed to respond to his written requests for the report. “The letter requesting them to submit the accommodation report was attached to our original court application. A second request was sent to them again on 26 June,” he said.

Owen said the City would have until 27 July to submit the report. “This will give us and [the landlord’s lawyer] enough time to look over the document and consider their proposal because we can speculate what they will be offering, but you never know,” he said.

The families have previously said that they would reject the City’s offer if it suggests housing them outside of Woodstock. They are refusing to be moved to Blikkiesdorp and Wolwerivier, low-cost developments far from the city centre. This comes as the City announced plans to build 4,500 houses as part of its “integrated housing project” in Wolwerivier which is situated about 25 kilometres from the city centre.

The matter was postponed until 3 August.