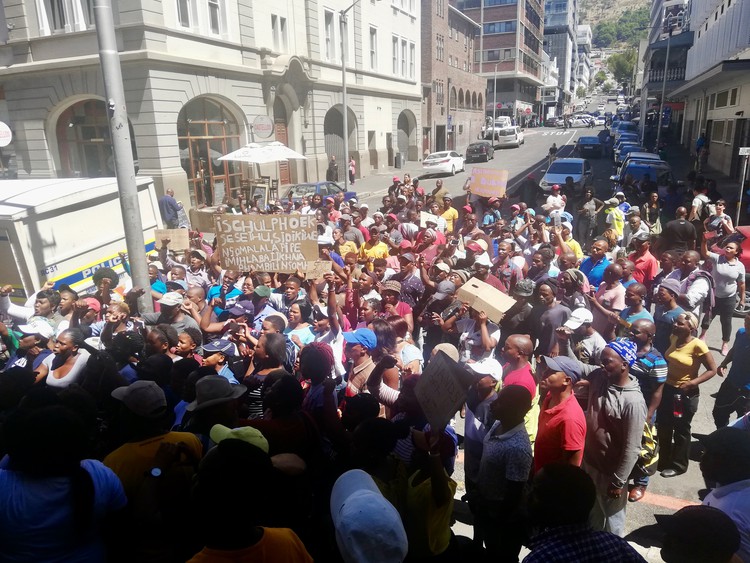 Over 200 people occupying private land in Schulphoek, Hermanus, picketed outside the Western Cape High Court on Tuesday, where eviction proceedings have been brought against them by the owners of the land, Cape Theme Parks and Cavcor. The case was postponed to 18 June to give time for the respondents to file answering affidavits.

The former Zwelihle backyarders have occupied the land since March last year. They have named the informal settlement Dubai. They resisted attempts by the Red Ants to remove them throughout 2018, and there was wide-scale unrest and protests in Hermanus that spilled into the residential areas in July.

The other respondents are Overstrand Municipality, SAPS and the Western Cape MEC for Human Settlements.

The picketers were supported by community leaders from Vosho informal settlement in Khayelitsha.

The Zwelihle community and the land occupiers say they were promised Schulphoek would be used to build houses for backyarders. There is a bitter controversy over Schulphoek. In 2010, land nearby was sold by the Overstrand municipality to property developers Rabcav (a joint venture of Cape Theme Parks and Cavcor).

In May, Ntomboxolo Makoba-Somdaka, spokesperson for provincial Department of Human Settlements, said a decision was reached with the land owner: “They are willing to sell and we are willing to buy [the land].” But she said the land would first have to be valued before a sale could take place.

However, Rabcav had already signed an agreement to sell the property to Cape Metropolitan Investments in May 2017 for R30 million. Rabcav has to hand over vacant land to the purchaser, hence the eviction proceedings.

Applicants’ attorney Craig Ward said the eviction application was in terms of the Prevention of Illegal Eviction from and Unlawful Occupation of Land Act (PIE). He said the respondents have already been interdicted in a previous case by the court from entering or occupying the land and from erecting structures on the land.

Community leader Gcobani Nzongane said residents had occupied the land because they were tired of empty promises. “Over 4,000 people are now living on that land, desperate people who have no place else to go. The community was overcrowded; people could no longer afford to pay rent, because some of them are unemployed,” said Nzongane.

He said the community had signed a memorandum of agreement saying that the land will be bought by the national and provincial government.

“That land was left vacant for many years. They were not developing it while people were struggling to find places to stay,” said Nzongane.

For 24-year-old mother of two, Mihle Mpotulwana, moving into the informal settlement has helped relieve some of her money worries. With a monthly salary of R2,500, she says living as a backyarder was a struggle. She paid R500 rent and still had to pay for electricity. “Now I do not have to pay rent. Yes, basic services are harder to reach but I have more money to spend on my children and I can save a little,” she said.