“I just want to do the right thing”, wife of Proexec owner tells court 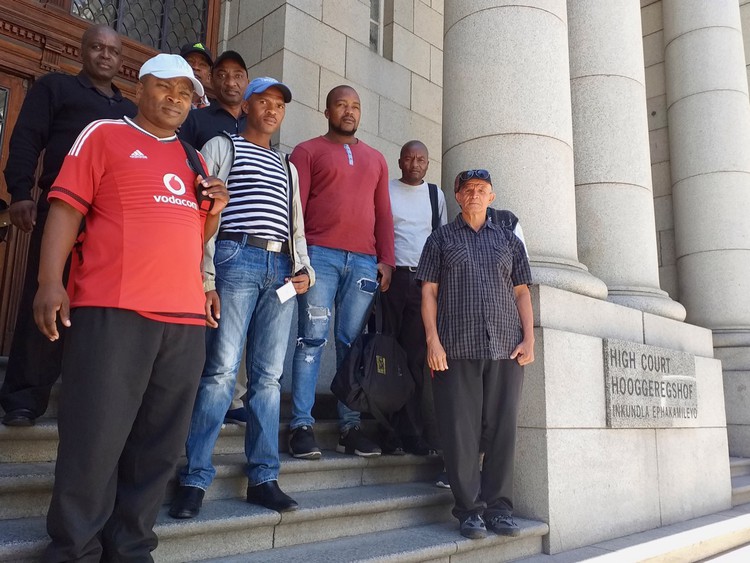 Fikile Vakele (wearing the red top) was joined by his former colleagues of Proexec Security Network at the Western Cape High Court on Wednesday where the company’s owner was ordered to pay R2.3 million in outstanding contributions to the pension fund. Photo: Barbara Maregele

“There is no doubt that the fund has made out a case for the relief sought,” Judge Andre le Grange ruled on Wednesday. “The owner shall pay and provide all outstanding schedules which Levy has indicated they have difficulty getting. Those must be delivered, if possible, in 30 days.”

Until about September 2017, Proexec employed over 200 guards at buildings and apartment blocks in the Sea Point area.

In 2018, the Fund brought an application to ask the court to compel Levy to pay outstanding contributions as well as interest on the late payments.

Throughout the proceedings, Levy’s wife, Natasha, has argued that the company could not pay the outstanding fees.

In October 2018, the matter was postponed for three months to allow the attorneys representing the Fund enough time to respond to the company’s version of events.

During the hearing on Wednesday, Levy acknowledged that there were outstanding contributions owed but disagreed with the amount calculated by the fund. “There is still money outstanding owed to the provident fund however; there is a discrepancy with how much we owe. People make mistakes and Mr Levy was trying to rectify those mistakes,” she said.

Levy told the court that her family was barely making ends meet and therefore would not be able to repay the fund. “It’s not that we don’t want to pay the money … We are homeless, we are not trying to get away with it but we don’t even have enough food to put on the table for our children,” she said.

“I know there are many people, even the [employees] are probably sitting with similar issues but how do we pay when we can’t pay?” she asked.

The attorney representing the fund told the court that while he empathised with Levy, it was not enough to constitute a proper defence. “We also have their ex-employees who also face hardship possibly because of what has transpired. They’ve been thinking they were contributing towards their pension but back at the ranch, the money didn’t go to the fund.”

Fikile Vakele, who had been employed by the company for nearly ten years, stood up in court and told Le Grange: “We don’t know how we are going to get our money. They’ve been deducting the money from us for years but I got nothing.”

After an adjournment, Levy conceded that the outstanding contributions to date amounted to R2.3 million and not the R2.5 million initially stated by the fund. Briefly explaining the order to Levy, Le Grange said: “The order means they are entitled to say the court has ordered that you should pay the amount. It is then for them to decide whether or not to act on it. You won’t go to jail like in the past for not paying. So when you do get funds or start a new job or new business then they can come and collect.”

Outside court, Vakele said, “We are not 100% happy because it seems they will sort the matter between themselves and he [Levy] won’t go to jail. Next week, we will be opening a criminal case against Levy … If I wasn’t lucky to find another security job I would be sleeping under a bridge.”