Court challenge to coal mine

Case is significant for future of South Africa’s protected areas 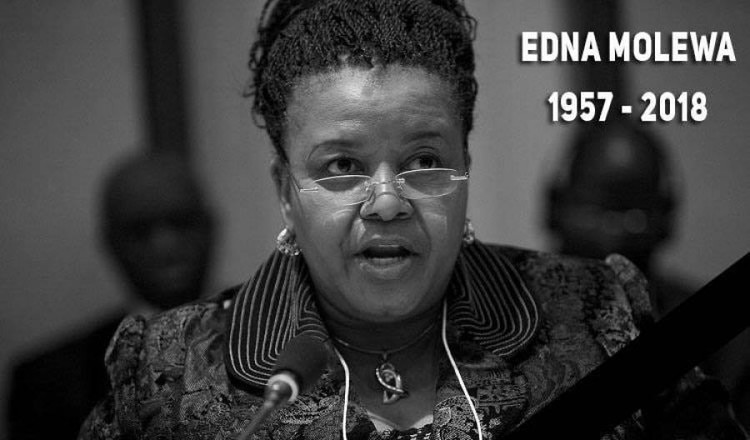 Enda Molewa, who died in September, granted permission for coal to be mined in a protected area, when she was Minister of Environmental Affairs. Photo from government website

While much of her work was widely admired and supported, the legacy of the late Edna Molewa, who was Environmental Affairs minister, is not uncontested. And perhaps nowhere more so than in her decision to allow a new coal mine to be developed within a critical biodiversity and water conservation area of the highly threatened Mpumalanga grasslands.

This week, from Tuesday to Thursday (16 – 18 October), that decision – and by extension also Molewa’s environmental legacy – will be under the spotlight in the Pretoria High Court. The controversial mining authorisation within the formally proclaimed Mabola Protected Environment is being challenged by a coalition of eight environmental and social justice groups.

It is one of six legal challenges that the coalition is bringing against decisions by various government departments and authorities that, collectively, opened the way for the development of the Yzermyn underground coal mine at Mabola by Atha-Africa Ventures. This is the local subsidiary of an India-based transnational mining and minerals company, Atha Group.

Atha-Africa, which says it was invited to invest in South Africa by the South African government in terms of the BRICS partnership, acquired prospecting rights in the Mabola area near Wakkerstroom from BHP Billiton in 2011. It has set about acquiring a mining right over 8,360 hectares on 12 farms.

The first four authorisations have been granted or approved, and all five are currently being legally challenged or objected to by the coalition.

But there was also a sixth authorisation that was required, and it was – arguably – the most crucial of all: permission to mine within a protected environment proclaimed in terms of section 48 of the National Environmental Management: Protected Areas Act (NEMPAA).

This section prohibits mining in a protected environment, even if other statutory authorisations are in place. However, it also creates an exception, if the ministers responsible for the environment and for mining both grant written permission for commercial mining to take place within the protected environment.

The 8,772-hectare Mabola Protected Environment, which lies about 50km north-east of Wakkerstroom and covers parts of both Mpumalanga and KwaZulu-Natal, was declared on 22 January 2014, along with four other wetland areas in Mpumalanga. The declaration was made partly because Mabola is recognised as a high-yielding, highly strategic water catchment area that provides water for South Africa’s economic heartland in Gauteng as well as to neighbours Swaziland and Mozambique. It was also proclaimed for its unique biodiversity that include Red Data List threatened bird species such as the critically endangered Rudd’s Lark.

All of the proposed underground mining is planned within the protected area, while the surface infrastructure of the mine, to be constructed on a much smaller area of approximately 22.4 hectares, falls outside of the protected area but is still largely classified as “Irreplaceable Critical Biodiversity” and “Optimal Critical Biodiversity”, and falls within a “Protected Area Buffer”.

Despite the uncontested significance of the Mabola Protected Environment, NEMPAA section 48 permission for Atha-Africa to mine here was granted jointly by Molewa as Environmental Affairs minister and by then minister of Mineral Resources Mosebenzi Zwane.

It is this permission that is the subject of this week’s judicial review being brought by the coalition.

The Mining and Environmental Justice Community Network is in turn a network of communities, community-based organisations and community members whose environmental and human rights are affected, directly or indirectly, by mining and mining-related activities.

The applicants want an order reviewing and setting aside the approval by the two ministers, and for the ministers to be ordered to reconsider their decision while taking full account of “all relevant considerations”.

The three government departments are contesting the application.

Atha-Africa is not opposing the setting aside of the section 48 permission and reconsideration by the ministers. But it is opposing the applicants’ request to the court to also order the two ministers to defer any decision regarding the NEMPAA application until after the final outcomes of various administrative appeals against other authorisations obtained by Atha-Africa. It is also opposing the applicants request for the decision to be deferred until after the mining company has made “full and secure financial provision” for the complete rehabilitation of the protected area affected by mining, including the treatment of any polluted water.

While the applicants are unhappy about many aspects of what they believe to be the unjustified approval of the Yzermyn coal mine, there is one aspect that worries them greatly: the secrecy with which Molewa and Zwane gave their respective permissions for the NEMPAA section 48 requirement.

Atha-Africa sent its section 48 request for permission to mine in the protected environment on 3 May 2016. Molewa considered this application on 20 August 2016 and granted the mining company the required written permission. Three months later, on 21 November 2016, Zwane signed off his co-approval. There were no public statements, no media releases and – significantly – no correspondence with any of the interested and affected parties informing them of this decision.

It was only on 31 January the following year that they became aware, and then only in an indirect way.

The Centre for Environmental Rights (attorneys for the Mining and Environmental Justice Community Network of SA, the first applicant) asked the Department of Water and Sanitation for documentation relating to the granting of the water right to Atha-Africa by the minister so that the coalition could make representations in this regard. In its response, the department sent a copy of the mining company’s letter to the minister – and attached to it was a copy of a document recording the written permissions from Molewa and Zwane the previous year.

“This is denied by the Ministers [in their answering affidavits] but the denial is a completely bare one. Nothing is said to refute the detailed explanation provided by the applicants for their assertion in the founding affidavit. To the contrary … the applicants and the CER were met with sustained stonewalling by the Environment Minister, the DEA [Department of Environmental Affairs] and the Minerals Minister.”

Government lawyers will be arguing that the Section 48 written permission was granted subject to “multiple” conditions, and that by the time Atha-Africa had applied for it, these other authorisation processes had already been completed. “Given the inter-related authorisations required, the Ministers took a decision to incorporate these processes into their decision-making. They decided that, instead of approaching the issues anew, the Ministers incorporated into their decision-making, the processes followed in respect of other authorisations … The factual matrix was the same.”

Sadly, Molewa died after a short illness on 22 September, so she will not be in the Pretoria High Court this week to listen to legal arguments about whether her decision was correct and justified, or incorrect and requiring to be revisited.

Zwane, a highly controversial figure during his short tenure as Minerals Resources minister from 23 September 2015 to 25 February 2018 when he resigned following allegations of state capture – particularly over his role in the Vrede dairy farm and Gupta family wedding saga – has been replaced by Gwede Mantashe.

The outcome of this week’s Mabola review application will be crucial for the future of South Africa’s unique biodiversity and for its vital ­– and irreplaceable – future water supplies.