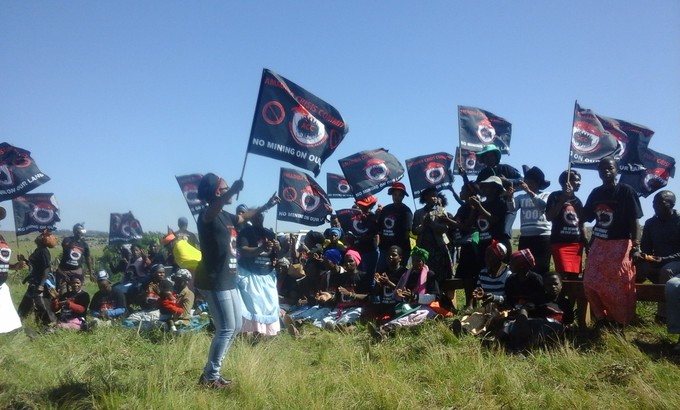 Protest against Xolobeni mining in September 2015.

Four men accused of assaulting residents of the Amadiba coastal area were released on R2,000 bail each yesterday at the Mbizana Magistrates’ Court.

The victims of the attack are opposed to government plans to award mining rights over their ancestral lands to Australian mining entrepreneur Mark Caruso and his local BEE partners, Zamile David Qunya and Maxwell Boqwana.

The mining project is known as Xolobeni Mineral Sands and is located in Xolobeni on the Wild Coast. (See map below.)

According to the Amadiba Crisis Committee (ACC), an organisation opposed to the mining of the Xolobeni mineral sands, the conflict started on 21 December 2015, after “the mining gangsters” had fired shots toward the house of Headwoman Cynthia Duduzile Baleni from a moving car. The ACC held a meeting several days later where residents were attacked on the way from the meeting.

According to ACC member, Mzamo Dlamini, five residents were injured, three of whom required medical treatment, one for a broken leg sustained after falling while running from an attacker. Two others sustained blows to the head from bush knives and knobkerries.

“There were 12 attackers in total, but police managed to identify six people. Only four of those were arrested,” said Dlamini.

A previous attempt by Qunya and Lunga Baleni, the director of Xolco, Mineral Commodities’ BEE partner in the Xolobeni mining project, to bail out the four on 31 December was unsuccessful.

On 4 January about 70 residents gathered to watch the bail hearing. The state opposed bail, concerned that several witness statements testified to the perpetrators pointing firearms at the victims. The state argued that until the firearms have been found and confiscated, bail should not be awarded.

Lawyers for the accused argued that the bail hearing should be transferred to Umtata, arguing that the rights of the accused would be prejudiced because “the Mbizana court was unduly influenced by anti-mining sentiment”.

After the four men were released on bail, Dlamini said, “It is disappointing that they have been released. In the interest of the community, they should have stayed inside. These people had firearms, which most likely are unlicensed, firearms that have not been found by police. The police only found a gun cartridge on the scene. The rest of the attackers have not been found yet. We will be holding a community meeting next week to discuss this outcome.” [Another source informed GroundUp that he police found several cartridges.]

Xolco chairperson, Christopher Ngcwele, said he heard about the release of the accused and believed that they never attacked anyone. Instead, he says, the accused are the ones that were attacked. He said they supported the mining project 100 percent and so did the ACC back in 2002 but because of village politics, the ACC is now opposed to it.

Correction: The article has been edited after publication to an inconsistency in the dates on which the described events took place.