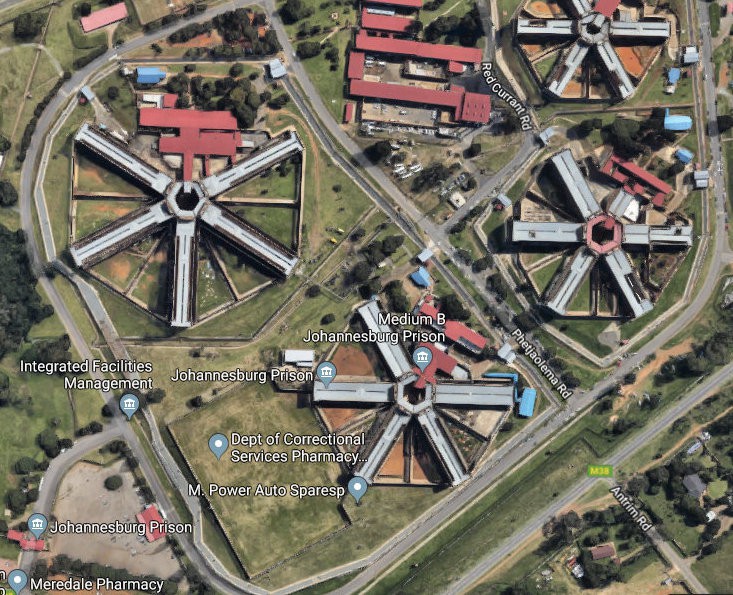 Mbalenhle Ntuli, who is a prisoner in Johannesburg Prison (pictured above), is taking the Department of Correctional Services to court. Photo from Google Maps

Mbalenhle Ntuli, an inmate at Johannesburg Medium C correctional facility, was supposed to argue his case against the Department of Correctional Services on Wednesday, but it was postponed because the department’s lawyer was out of the country.

The department was ordered to pay the costs for the day and the case was set for 3 September at the South Gauteng High Court.

Ntuli told the judge that he was not happy with the postponement. He said his case had been in court for close to a year and his course registration was expiring on Friday.

His studies have already been compromised after being denied access to his laptop in his cell and now he will incur financial costs for not completing his course in the stipulated time, he told GroundUp.

“I’m disappointed…I will have to register again and do all of those courses again. I will see if I can negotiate with the college but I am still going to continue my fight to use my laptop [in the cell],” said Ntuli.

Ntuli, who is representing himself in court, is taking the department to court for denying him access to his laptop which he needs for distance learning.

He is a registered student at Oxbridge Academy – a private distance learning college based in Stellenbosch, Western Cape. He enrolled in a computer studies course in November 2017.

Ntuli started serving his 20 year sentence in March 2011. When he started studying in 2017, he was permitted to use his personal laptop in his cell because there was no computer room facility at Johannesburg Medium B prison.

About a year later he was transferred to Johannesburg Medium C prison where his laptop was confiscated upon arrival. He said he had shown the head of education in the prison his registration letter and his proof of tuition payment but “she couldn’t care less”.

He then wrote an application to be allowed a laptop in his cell, stating that he was a registered student and his course required access to a laptop. His application was denied by the prison management who said Oxbridge Academy confirmed that Ntuli only needed a computer to type his assignments which could be done in the computer room.

National spokesperson of the department, Singabakho Zwide, said inmates had to substantiate why it was necessary for them to use the laptop in their cell and even then, it was monitored very closely. This was because it was a security risk, according to Zwide.

“Inmates can use laptops to create fraudulent documents even when they do not have access to the internet …They are able to smuggle memory cards and clone sim cards … You’ll be surprised at what happens in these facilities,” he said.

Ntuli told GroundUp that he suspected he was being victimised after opening the case against the department. He said he was sent to isolation for seven days for “disrespecting a prison official”.

According to the department’s spokesperson, Zanele Mabunda, the incident that sent Ntuli to isolation happened on 14 July when he was prevented from signing court papers by the prison officials. Mabunda said Ntuli forced his way into an area where inmates were not allowed and was “arrogant” and shouted at officials.

The department apologised for not allowing him to sign the papers. He was later called to a disciplinary hearing and then sent to isolation on 22 August.

Ntuli said an argument between him and the officials had ensued after he was prevented from signing his court papers, which had to be submitted to court in the upcoming week. He said he told the officials that he had a right to sign the papers.

After the argument, he proceeded with a visit from his brother. About a month later, on 20 August, Ntuli said he was called for a disciplinary hearing and told that he was charged with disrespecting an official and was being sent to isolation for seven days.