Xolobeni goes to court over community rights versus mining

Case will shed light on land ownership and customary law 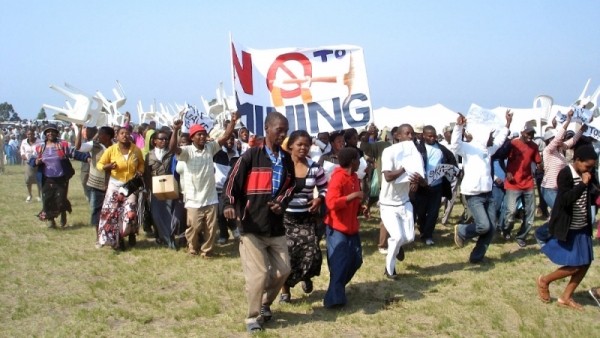 A 2008 protest against mining in Xolobeni. Photo: Ken Gaze.

The Umgungundlovu community of Xolobeni on the Wild Coast has filed an application in the High Court in Pretoria, against a number of government officials, including the Minister of Mineral Resources and the Minister of Rural Development and Land Reform. The community is represented by the firm of human rights lawyer, Richard Spoor, and the Legal Resources Centre.

At stake is a mining rights application filed by Transworld Energy and Mineral Resources (TEM) over property presently held by the community in terms of customary law.

If granted, the mining activities will, according to the papers, affect – and most likely displace – over 115 residents in about 70 households who currently live on the proposed mining area and are parties to the case. However, as the papers explain, substantially more residents in the surrounding areas will be affected by the proposed mining activities.

The community is seeking an order preventing government from granting mining rights over property belonging to the community or, alternatively, that the right not be granted until the land owners have consented.

The community is also seeking an alternative order that, if the mining rights are granted, TEM compensate the community for any losses or damages which they are likely to suffer as a result of mining.

Under the Mineral and Petroleum Resources Development Act, an applicant for a mining right needs to consult with interested parties as part of the application process. However there is no requirement that an applicant needs to obtain the consent of a community holding rights in the land in order for the mining right to be granted.

The issue is complicated slightly by that fact that the land the community presently lives on is considered state land.

While the residents of the Umgungundlovu may not have formal title over the land, they are contending that the households (also known as imizi) living on the land have rights over both the residential and agricultural land in terms of customary law.

The community also argues that in customary law, it owns the remaining portions of the land not used and occupied by the imizi.

The papers also explain the why the land is necessary for the community’s survival, how TEM’s prospecting activities have hindered investment in the area’s tourism industry as well as the fact there are hundreds of graves in the proposed mining area.

Beyond the impact that mining activities will have on the community, the community argues that the granting of the mining right conflicts with its customary laws. The central tenant of the community’s customary law is that there needs to be consensus among community members before any property rights can be transferred or granted.

However, their case is not based solely on the importance of preserving the community.

The community has invoked provisions of the Interim Protection of Informal Rights to Land Act, which protects people from being deprived of any informal rights to land they may hold. These informal rights may include the use and occupation of land in terms of customary law or practice of a tribe.

The community is arguing that the grant of mining rights over their land constitutes a deprivation of the rights in the land and as a result, the provisions of IPILRA (and their customary law) must be complied with.

No court date has been set yet.

A battle has raged for years in Xolobeni between those for and against mining.

This article was amended after publication to note that the Legal Resources Centre are also representing the applicants in the court case.