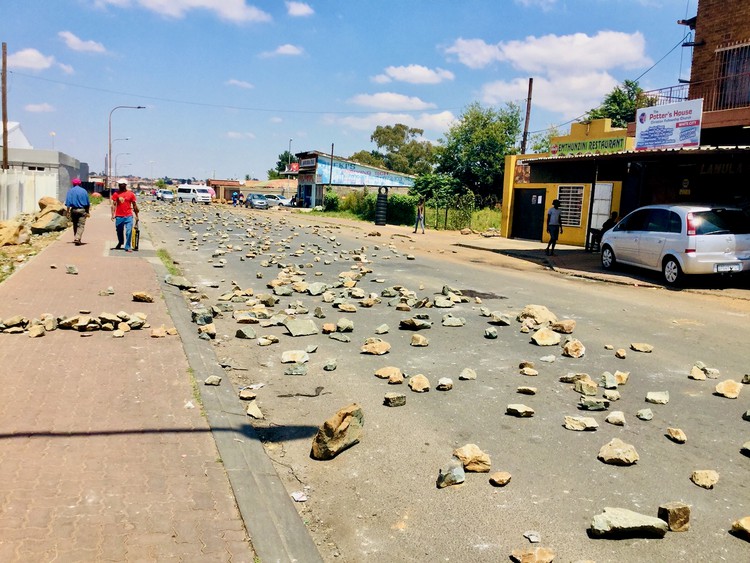 Residents of White City in Soweto blocked roads and burnt tyres on Wednesday and Thursday. They said they will not stop protesting until their ward councillor steps down. Photo: Kimberly Mutandiro

Starting at 3am, residents of White City in Soweto blocked roads and burnt tyres on Wednesday. They were protesting against their ward councillor, accusing her of nepotism, disrespecting them, failing to develop the area, and failing to create jobs for unemployed youth. Several areas have suffered sewage spills and protesters blame the councillor for not fixing the mess.

On Thursday, key roads in the area were still blocked with tree branches and stones. Community members say there have been sporadic protests for the past three months and road closures have become common.

Residents say they will continue protesting until the councillor steps down.

The community marched on 3 January to deliver a memorandum to the council, but to date they say they have received no response.

“Our councillor, Zodwa must fall. She does nothing for us. I have seven grandchildren who are unemployed but the councillor gives jobs to her family members and friends. When we try to talk to her she disrespects us,” said Bella Hlatshwayo.

Sbongile Dhlamini, another resident, said, “When we go and report our problems to our councillor she disrespects us. Our area is not being maintained. The councillor is not employing people to cut grass … We are having to pay R20 from our pockets per household for grass to be cut.”

Community representatives showed GroundUp an abandoned business area, now a hangout for nyaope smokers they say. They say it was a vibrant business place once.

“We have to catch taxis to a distant mall to do shopping. Our area does not even have a shopping complex. Our local stadium has been closed for years. Children do not have a place to play or do sport and as a result they end up indulging in crime or smoking nyaope. The councillor has failed us,” said Phumla Zungu.

“Recently people were employed in a school construction project. The councillor hired her own people. Some people are being hired from as far away as Orange Farm. She must step down and give other people a chance,” said Zungu.

Resident Ruth Ntshangase expressed concern over a drain which has been spilling faeces in front of her house for weeks. Her area has also not had electricity for eight months, she says.

“We are tired of complaining,” she said.

“We approached the councillor to attend to the situation. She always says that she is busy. The best option is for her to step down,” said resident Dumisani Duze.

“l cannot step down for l have done nothing wrong. The people voted for me,” said Nxumalo. “The protests are being planned by people who have personal issues with me and who are trying to further their personal vendettas. There are certain people from some political party who are personally going house to house inviting people to protest against me. Such people are dividing the community. They are trying to discredit me because l have been councillor for a long time.

“I have done countless things other people can attest to. The problem is these people do not attend meetings to forward their complaints. Issues like the Jabavu Stadium and other projects are all operated on a budget. We have to wait for budgets to be approved by relevant departments.”

Nxumalo added: “I still maintain that I need evidence on all the above allegations and some of the things said here leave much to be desired.”

Additional comment by the councillor was added after publication.