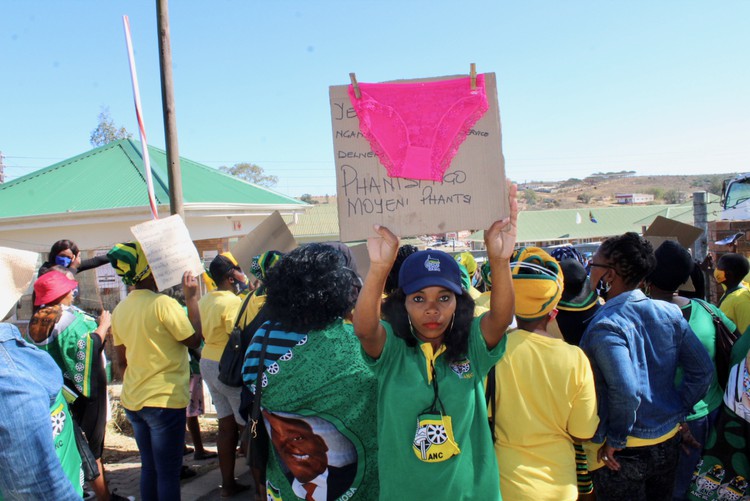 Residents and members of the ANC Women’s League marched to the municipal offices of Ngqushwa, near Peddie in the Eastern Cape, on Tuesday, demanding Ward 8 Councillor Lungephi Moyeni be removed from office with immediate effect.

This comes after a sound clip has been circulating on social media in which Moyeni, purportedly, is heard asking a former Expanded Public Works Programme (EPWP) worker, apparently, to lower her underwear for him.

The Mtapho Development Centre, ANC Women’s League, Office of the Attorneys of Ngqushwa under Sikhona Mafongosi, Khula Development Centre as well as other Ngqushwa localities joined the march of about 150 people to Ngqushwa Local Municipality.

Nokonwaba Mbotyana, the EPWP worker, said it happened in April and she reported it, but to date nothing has happened.

‘’I was at work with my colleagues next to the road cleaning when Moyeni approached our working spot with his friend. He greeted and asked me to give him something. I carelessly laughed and told him I have nothing. I didn’t take that seriously as I thought he was referring to me buying him a drink,’’ said Mbotyana.

She said she was shocked when Moyeni called her later. She said that he asked, ‘’Do you know what I want? I want that something in between your legs under the undies.” Mbotyana’s phone was automatically recording. She hung up.

The recording was played at the march in the presence of municipality officials. While the request for sex is clear, there is no explicit demand that it is in exchange for a job. But Mbotyana says that it was in the context of her wanting a job.

Mbotyana said she rushed home to tell her mother, who advised her to take the matter to the municipality.

“I want my job back and Moyeni to be removed because I can never be comfortable anymore around him. At home we depend on me and my mom, who is selling fruits in town. I desperately need this job but I am not sleeping with anyone for that,’’ she said, angrily.

Her mother, Nofuna Mbotyana, said: ‘’All I want now is justice to be served.’

She said the family was struggling to survive and desperate for the job. “I raised my children with hard earnings of selling fruits in the streets. I never sold my body to anyone for raising my children .. I hate what this man did to my child,” she said.

She said that she confronted Moyeni about the allegations and he denied it. She said she played him the recording and then he said he was sorry, maybe he had been drunk.

Her daughter’s contract was not renewed and she says Moyeni also refused to sign her forms to apply for electricity.

Ngqushwa Local Municipality Speaker Sanga Maneli confirmed a letter of complaint had been received on 23 April, but because of the Covid-19 lockdown, the petition management committee could not meet.

Maneli said before the councillor can be removed, there must be an investigation into the allegations. He said he would revert in seven days.

GroundUp made several calls to Moyeni, but his phone was on voicemail.

Moyeni was elected during the 2016 elections and is still serving his term.