“The decision today is unjustifiable. Council is a total and utter shambles,” says housing activist 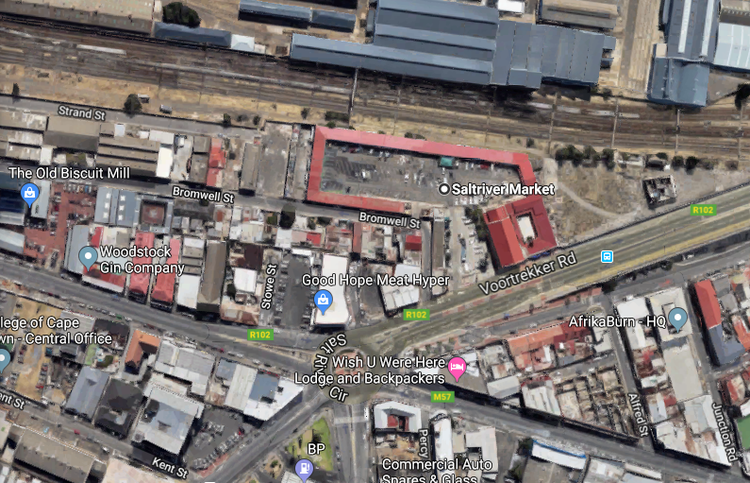 Salt River market along Voortrekker Road, is located on two MyCiTi bus routes and alongside Salt River Rail Station, a site that councillor Brett Herron has said “is the perfect location for a higher density mixed use, mixed-income development in the inner city”. Photo: 2018 Google map / 2018 AfriGis (Pty) Ltd.

The Cape Town City Council was scheduled on Thursday to announce its decision on the sale of City-owned land to housing non-profit organisation Communicare for redevelopment for social housing. But the decision was pushed back to the next council meeting because “the DA caucus has some queries around the technical aspects of the report” said ward councillor for the area Dave Bryant (DA).

The land in question is Salt River market along Voortrekker Road, located on two MyCiTi bus routes and alongside Salt River train station. It is a site that councillor Brett Herron has described as “the perfect location for a higher density mixed use, mixed-income development in the inner city”.

The matter was referred back by councillor Angus Mckenzie “for further technical clarification”. Mayoral Committee Member for Assets and Facilities Management councillor Stuart Diamond said “this will allow us to thoroughly understand the integrated housing model proposed by our social housing partner [Communicare]”.

CEO of Communicare Anthea Houston said of the delay, “This is a set back for those in need of affordable housing opportunities in the city … It would be huge loss to Cape Town if they pull out now.”

Some civil society organisations were outraged. “We are in the midst of a housing crisis and nothing can excuse council’s lack of urgency and vision when so many people are being evicted,” said Jared Rossouw, co-director of Ndifuna Ukwazi. “The decision today is unjustifiable. Council is a total and utter shambles.”

“This is deeply disappointing and worrisome. It has been in the pipeline for over ten years and been through two political party administrations,” said Helen Rourke, programme manager at the Development Action Group. “We appeal to the City Council to expedite the review of this application and resolve any unanswered queries,” she said.

“I fully support it and want to see it happen as soon as possible,” said Herron of the proposed project. “We have an affordable housing crisis in our city and this is a project that will help us address that crisis.”

Rossouw said that if the project is approved by a council, “It would be a first for the city and set a precedent for social housing across the country.”

How social housing could work

“We [Communicare] have spent R2.1 million so far in planning this project with extensive input from the City since 2014,” said Houston.

“This kind of social housing can go to four storeys or higher, as opposed to Breaking New Ground houses or other programmes which don’t have funding to go much above one level. We need dense, tall buildings in well-located areas so you get more use out of the same amount of land,” said Rossouw. “And the only way to make this feasible is to cross-subsidise.”

Cross-subsidisation means having tenants from across the income spectrum, with those in higher brackets subsidising the rent of the lower income tenants. “Mixed-income works because it is a model that makes good long-term maintenance possible,” said Houston.

Rossouw said, “Some councillors want to sell the land at market value to private developers because it will generate more revenue for the City, and there are others who realise that selling it at nominal value will help address spatial apartheid.”

“As ward councillor I remain committed to the provision of well located affordable housing and remain confident that this project will prove to be a great success going forward,” said Bryant.

GroundUp has written previously on the viability of subsidised social housing – see here.

The next council meeting is scheduled for 13 December 2018.