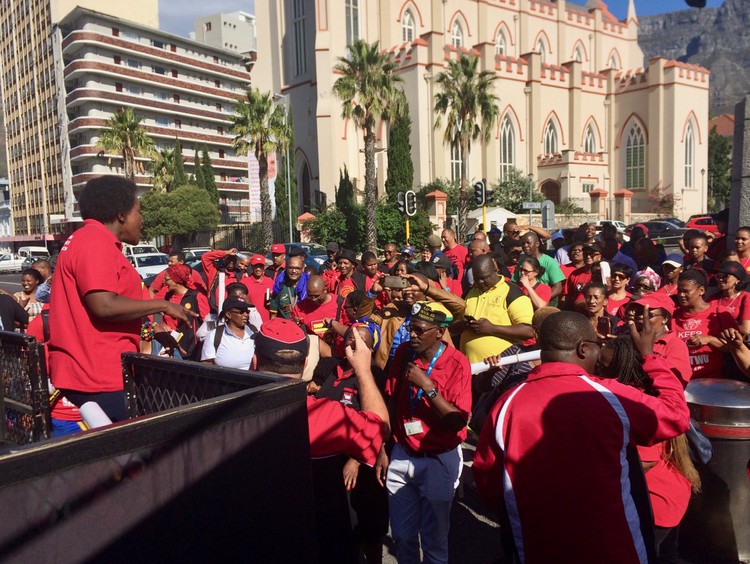 The Congress of South African Trade Unions (COSATU) picketed outside Parliament on Thursday afternoon to call attention to what COSATU says it considers a “deepening crisis in Cape Town”. The protest took place shortly after a protest by its rival the South African Federation of Trade Unions (Saftu) at the same venue.

Close to 300 COSATU members delivered a memorandum demanding that President Ramaphosa, the Minister of Transportation, and government address among other issues the water crisis, public transport, the VAT increase, and the national minimum wage. The demands were almost identical to those of the earlier Saftu protest.

Hundreds of COSATU members poured out of five buses and gathered around a stage where union leaders lead them in singing, dancing and chanting. They sang, “It’s bad, but we are going forward” and “We are a moving train full of workers of COSATU”.

“Generally in Cape Town there is a sense that the government does not take care of black working families and instead focuses on the rich,” said Tony Ehrenreich, the provincial secretary of COSATU for the Western Cape.

Nandi Andries, chairperson of COSATU’s gender structure, read the memo, addressed to “Comrade President”, calling on him to intervene over a “desperate concern at the low levels of services and anti-poor budgets in the Western Cape and City of Cape Town”.

The memo was signed at 3:20pm after a delay due to the earlier Saftu protest. The crowd dispersed after the memorandum was signed by a representative from Parliament.

Eric Phindel, COSATU acting deputy secretary of core business, said, “There are issues sitting in Parliament relating to minimum wage, the water crisis and others, and the memorandum will be referred to.”

COSATU opposes the VAT increase that took effect on 1 April. The organisation also wants the national minimum wage proposal for R20 an hour to be higher, and for the wage to apply to domestic workers and farm workers.

COSATU also opposes the proposed new 27% water tariff by the City of Cape Town on the grounds that it will place “huge financial pressure on poorer communities”.

“As COSATU we believe that the City of Cape Town has neglected to look after the source of water and [is] now having the community pay for their mistakes,” said Paul Bester, COSATU provincial organiser. “So we are against any of the rebates or increases that are happening.”

Before the picket, the South African Communist Party pledged its support, calling on their “membership, the alliance, our partners in the struggle for an equal society and the public in general to support COSATU’s picket.”