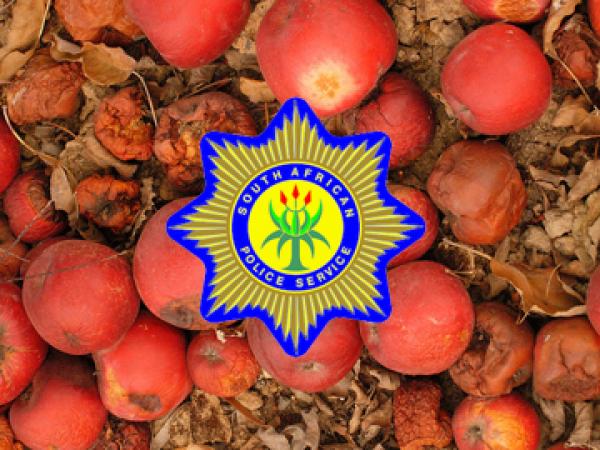 Too many bad apples. Original image of rotten apples by Alison E Dunn (CC BY 2.0).

I spent two years watching the police take bribes from drug dealers in west Johannesburg. I sat sequestered with a man called Raymond in his shop as he wrote down the times and stations from which the cops came. We watched men in tight T-shirts pop in and out of an orange security door built into the side of a block of flats on Ontdekkers Road and drop money into cop cars.

This happened throughout the day. The dealers schemed – if they refused a cop, he became an enemy, but if they reduced the amount, he would continue to feed lightly and be placated. Perhaps as little as R50 if there was only one cop in the car; maybe R200 if there were more.

Dealers, aware that I was a journalist, would pop their heads into the shop where we were sitting and nod hello. I was too stunned to reply.

The meticulous data Raymond collected became an impressive body of work. He would page back through his old ledgers and be able to pinpoint the station of the officer – Sophiatown, Florida, Brixton, Fairlands – and tell me when the bribe occurred and even hazard a guess as to the name of the officer from the call sign painted on the van.

If he wanted information on the cash amount, he was friendly enough with the dealers to ask them how much they deposited, roughly, on that particular day. The open-air, nonchalant level of corruption that exists in our country is hard to believe.

At a certain point during my research, there was a sudden change from the general free-for-all among the police on the strip. Two Tactical Response Team (TRT) officers from Florida police station said they wanted to catch the dealers and wanted to use Raymond’s shop to set their trap.

The TRT guys were part of a specialised team that responded to violent crime, such as hijackings. It was piloted and promoted by former National Commissioner Bheki Cele. The teams were suited with protective equipment, including hefty guns, a formidable back-up team for colleagues going into dangerous environments. Raymond agreed: he offered up his shop for the two specialist officers.

We soon found out the officers were only pretending to arrest the dealer. They took the dealer a short distance along Ontdekkers Road where they forced him to phone Chuba, his drug lord boss. Then they tortured him. They wanted the dealer screaming while they negotiated a price with Chuba for his release. From his shop, Raymond could hear the young man.

“They take a packet and put it over your head. Handcuff you. You think you are going to die,” explained Raymond.

The dealers don’t press charges because they are in South Africa illegally. In this instance, an amount of R6,000 was paid to the police to release the dealer.

A few weeks after this fake bust, a different set of police officers, this time from Sophiatown station, approached Raymond with a request to use his shop.

Raymond was understandably wary. “I will help you,” he said, “but please don’t do what Florida [station] did. I will only do this if you are here for real arrests.”

They reassured him. And so one night, Raymond sat with two police officers in the near dark. He had opened his shop especially, not to the public, but for the police. The three men waited and watched in silence. A dealer named Eseosa was targeted. When a purchase was made, the officers came out of Raymond’s shop and Eseosa bolted. The first cop pulled his gun and Eseosa stopped. They put handcuffs on him and took him away.

But it turned out not to be a real arrest either. They drove Eseosa to a nearby park and forced him to phone Chuba. The cops weren’t risking their jobs for the bread money, the small payments that flowed out of the security gate all day, every day. The real pay day for them came when they made good on their threat of making a ‘bust’. It was when making busts that these cops could see how much cash the freedom of a particular dealer was worth to the drug organisation.

The constable and her lover

“[Constable] Lerato is married to a drug dealer called Obi and together they take every opportunity to grab money,” Raymond tells me.

Lerato drives a Mercedes to work and parks it at Florida police station. The car shines beside the standard Volkswagen state vehicles. The Merc belongs to her partner, the drug lord Obi.

“A shiny beacon that says you can get away with basically anything,” says Raymond.

Chuba and Obi are in competition for territory and Lerato has introduced a pricelist on the strip to get payment from Chuba’s dealers.

“I can hear her screaming in the road from here,” says Raymond. “She says, ‘I want my money otherwise I’m going to close you’.”

When Obi is having a rough time financially, Lerato in her capacity as a police officer will arrest one of Chuba’s dealers every hour, if needs be. Punters are then forced to find their drugs elsewhere - from Obi. Lerato threatens to have the dealers killed and to have Chuba’s business closed down. She is the loud, screaming, open secret of Ontdekkers Road.

But she has been disciplined. She was confined to her desk for a few weeks to do paperwork. That was her punishment. Investigations started, but failed to go the distance.

Members of the Community Police Forum suspect that high-ups far above the station commander have an interest in keeping her safe or are being so strongly blackmailed with what she knows about who takes bribes that they feel they have no choice.

This was a small part of an extensive sticky ecosystem I observed while writing The Street, involving police, shopkeepers, drug dealers and users. It is this established unity (though not harmony) that makes it particularly difficult to break apart.

The question is: how to assist the residents like Raymond who try to fight the corruption?