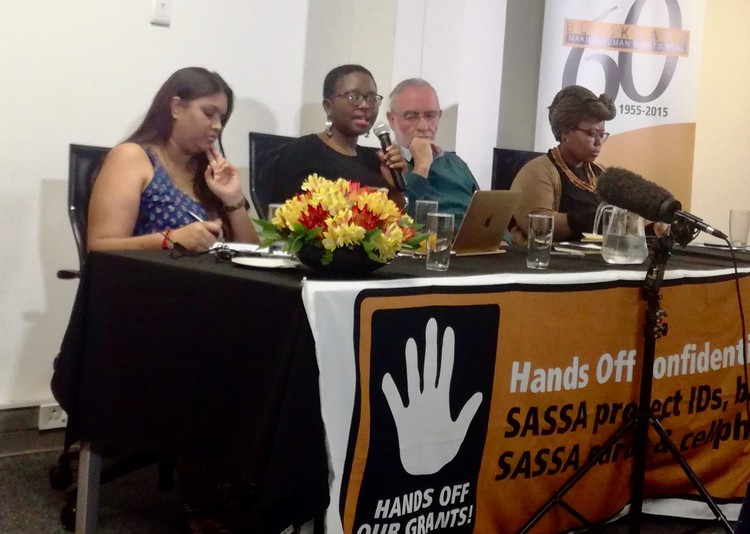 Social grant beneficiaries trying to get their money back from unwarranted deductions on their accounts find recourse “expensive, inefficient, challenging and not clear”, leaving them fearful,” said Evashnee Naidu, Black Sash’s regional manager in KwaZulu Natal.

She was speaking at a panel discussion on social grants hosted at the advocacy group’s offices in Cape Town on Thursday evening.

“The burden of recourse is placed on the beneficiaries. They have to call, visit the local offices to lodge the complaint, constantly follow-up on the investigation, and challenge that their money has been taken from them. Many of them become apathetic because of this process,” she said.

Senior advocate Geoff Budlender, who is representing the Black Sash in court, said “as long as the system works as it does, people in very large numbers will continue to have their money stolen from them”.

GroundUp first reported on the Black Sash’s Hands off our Grants campaign in 2014, which uncovered systemic problems with deductions being made by sibling companies of the social grant payment companty Cash Paymaster Services (CPS) (These companies are also owned by Net1, the company that owns CPS.)

“Our case took us at least five years to build,” said Naidu. From as early as 2012 and 2013 the Black Sash and its partnering groups have been documenting a variety of unexplained deductions such as airtime and electricity from the accounts of social grant recipients.

“In these five years people died, households went without, and those grants were severely eroded,” she said. Naidu said that CPS chose the most vulnerable to profit on.

She said that as a result of vigorous campaigning by civil society, former Minister of Social Development Bathabile Dlamini set up an inter-ministerial task team. “One of the challenges we found with the recourse system in place is that it’s not owned and managed by SASSA. So it takes a long time for these matters to be mitigated and dealt with,” she said. After five years of campaigning, grant beneficiaries are still “burdened” by the struggle involved in getting their money back.

Budlender said ring-fenced cards and accounts were needed to protect people from unwarranted deductions. “It’s a difficult thing to do because on the one hand people do need to have easy access to their money to use it in the way that they want. But the systematic exploitation which takes place is just unacceptable. There are too many stories for it to be accidents,” he said.

Budlender said several lessons were learned from litigation in the SASSA saga. Government shouldn’t try and do everything itself, but government has to take control. SASSA was created to take over the payment of grants from Social Development but was “simply incapable” of doing it, he said.

The accountability of officials was crucial. “The Constitutional Court sent a very strong message to ministers. Now they can be held personally accountable for things that go seriously wrong in their departments. This will have a significant impact on accountability,” he said.

Budlender said when government outsources its functions, as it did to CPS, the company becomes part of the state and can be held liable for its constitutional obligations.

The new mechanism of appointing a panel of experts to keep oversight and report to the court “has turned out to be a great success and has held SASSA and CPS’s feet to the fire, and probably saved us from catastrophe”, said Budlender.

Panelist Nomonde Nyembe, former attorney at the Centre for Applied Legal Studies, said, “One of the greatest difficulties was understanding how the deductions happen. Now we understand how it takes place but we don’t have proof.”

Nyembe said that for now, beneficiaries should be pulled out of the universal electronic payment system that Net1 created and be given banking numbers and cards.

Naidu said a recourse forum has since been established to look at how the current transition phase for payments from CPS to the Post Office will impact beneficiaries.

She said that SASSA already operates a Treasury account and currently pays grants directly (via EFT) into beneficiary accounts. The problem, however, is with cash payments.

The Black Sash said it would continue monitoring the impact of the new grant payment plan over the coming months.