Corporal punishment leaves girl without use of right hand 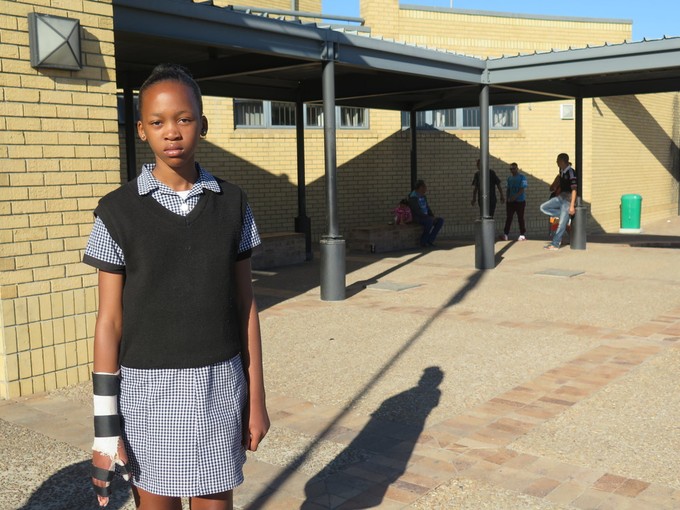 Siphokazi Tyalidikazi was 13 when she was caned with a hosepipe by her Grade 5 English teacher after she was accused of not completing her classwork – an incident that has resulted in her being unable to use her right hand.

Today, Tyalidikazi waited in anticipation outside the Blue Downs Magistrate’s Court where the case of assault against her teacher Linda Fadane of Nal’ikamva School in Mfuleni was due to be heard, a case which both Tyalidikazi and her mother hope will result in justice for them. As was anticipated, the case was postponed until 30 May.

“The doctor said it [had affected] the nerve,” said Nobantu, Tyalidikazi’s mother, explaining what she was told when she took her daughter to the hospital after the caning. The family has since been told that if Tyalidikazi continues to be unable to use her hand she will have to have it operated on.

Tyalidikazi is right-handed but since the incident she has had to learn to write with her left, which she says makes for slow writing. Her mother also has to help her with basic tasks such as bathing.

“We [have] actually entered into so many costs,” said Nobantu. She explained that in September last year her daughter was admitted to Melomed hospital in Gatesville and this depleted her medical aid funds.

The family has said that they are disappointed with the school’s governing body and allege that the body was campaigning on behalf of Fadane for people to come to the teacher’s court appearance to support her.

Nobantu said that her daughter has been called a “bad influence” by the school. She added that since the incident her child has not been happy at the school and was victimised by Fadane while she was still in Fadane’s class last year.

“We want justice to be served,” said Nobantu, adding that they are also hoping to be compensated for the costs that they have incurred as a result of the incident.

“[The] only way [I will] be happy is when the court passes judgement against her,” said Nobantu.

“We know what we see in schools is a reflection of what is happening in the community. This is a country with high levels of violence,” said Godana.

“They [teachers] will justify this nonsense by saying ‘you beat with love’. What is beating with love? Any form of inflicting pain to a child is a violation,” he said.

The Western Cape Department of Education confirmed that they had charged Fadane with assault, which is constituted as misconduct.

“She was found guilty and sanctioned by the WCED. I am unable to comment on the criminal case as this resides with the SAPS,” said Jessica Shelver spokesperson for the Western Cape’s Education Minister Debbie Schafer.

“The department views allegations of corporal punishment in a serious light. Corporal punishment is illegal in terms of the South African Schools Act. Our district offices provide training and advice to schools on discipline, as required. We provide extensive guidelines on our web site on dealing with all form of misbehaviour. Schools manage discipline in line with their code of conduct. Learners and their parents may lodge complaints with our district offices and can phone our Safe Schools Call Centre for advice on 0800 45 46 47,” Shelver said.

Attempts to get comment from the principal of Nal’ikamva School were unsuccessful. We were also unable to contact Fadane.