Workers say salaries have not been increased since 2014 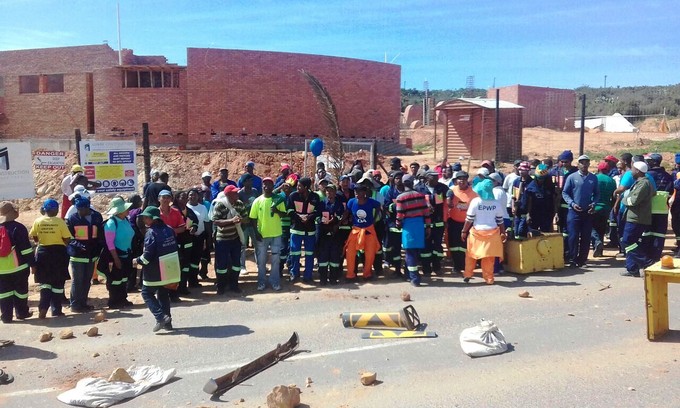 Construction has come to a halt at the R164-million Sarah Baartman Centre of Remembrance after 150 workers protested, demanding fair treatment.

Striking workers blocked the main road in Hankey in the Eastern Cape with concrete slabs and tyres.

Speaking on behalf of the workers was Lubbe Construction Chief Liaison Officer Derrick Jaffon, who has been summoned to a disciplinary hearing for siding with the workers. He is accused of inciting workers to strike, causing disturbances on site and insubordination.

Jaffon said, “I am employed as a middleman between the company and the workers …The issue at hand here is a longstanding disparity in wages between the locals and workers who Lubbe brought from Limpopo and neighbouring countries.

‘The local guys are earning less than R3,000 a month, while the guys from out of here are getting a minimum of R8,000 for the same job.”

Jaffon said workers from outside arrived as general labourers but were pushed up “overnight” to artisan level – to positions of line-managers, carpenters, bricklayers and plumbers “in order for them to earn more money”.

“It is the company that is now creating tension in our once peaceful community,” he said.

He gave the example of a front loader operator who had been promoted to storeman. “He failed to even start the engine of the vehicle,” said Jaffon.

Sherman Mitchel, 25, who says he is a qualified surveyor, is being paid R150 a day. “I have tried to raise the issue of pay rise but with little success.There are many qualified artisans here who are in my situation,” he said.

Jaffon said that to win the tender Lubbe Construction had agreed to employ nearly a thousand local workers during the construction period. Furthermore, local contractors had been replaced by firms from Rustenburg and Johannesburg.

He said there had been no salary increases since 2014, and the local general labourers still earned R150 per day. Employees were using open toilets and there is no roofed shelter or water on site. The company did not allow union activities on its site, he said.

A worker, who spoke on condition of anonymity, said, “We received letters at the end of August that we would be retrenched. We were surprised that just after the notices were issued, Lubbe Construction brought some new guys from Johannesburg to work here, yet the company had said they were retrenching because there was no money.”

Workers claim 50 of them received retrenchment letters without consultation. There are 193 employees on site, of whom 141 are local and 52 are from elsewhere.

“However, we are making attempts to facilitate that all parties get around the table. We will continue engaging.”

GroundUp made several attempts to get comment from the project manager, Ronald van Der Walt, and from site managers Gerald Matangira and CJ Beukes.

GroundUp reported on the labour dispute at the Baartman Centre a month ago.