Construction company has completed only 20% of housing contract 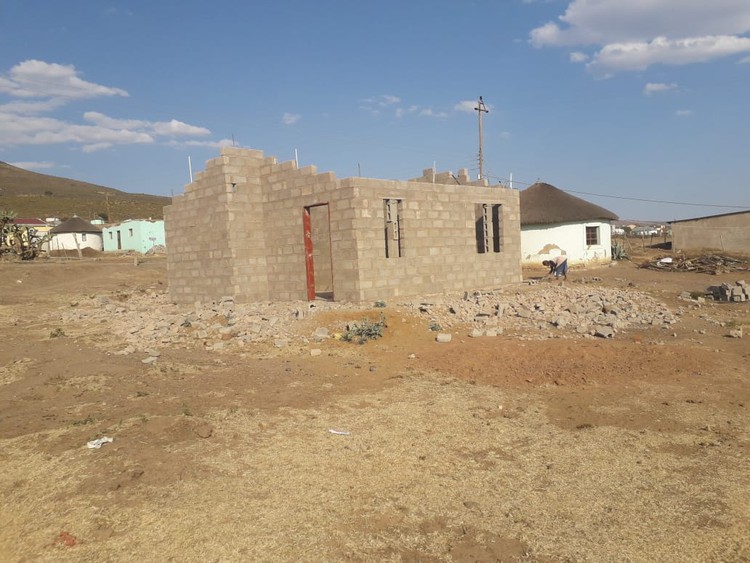 An RDP house built early in 2017 is still without a roof. Photo by Nombulelo Damba-Hendrik

In 2015 Gauteng-based company Vuikani Construction and Transport was awarded a R82-million tender to build 489 houses in villages in the Cofimvaba district. Four years later, only 95 houses have been completed and residents are fed-up.

Eastern Cape Department of Human Settlements spokesperson Masiza Mazizi confirmed that 140 RDP houses had been partly completed and 254 houses had not even been started.

Angry residents and councillors in the villages where the houses were to be built said the construction company was unacceptably slow.

“This year Vuikani came in June and left in August. They only finished the houses they left last year,” he said.

Ward 2 councillor Neliswa Gadeni said the company was not capable of doing the job. In her ward, only 18 houses had been completed.

Ward 4 councillor Manyewu Shasha said in his ward Vuikani had stopped working. “Not a single house has been finished since 2016,” he said.

Frustrated housing beneficiaries said they cannot complete the houses as most of them are unemployed and dependant on social grants.

Vuikani Construction and Transport Managing Director Sibusiso Makwedini blamed the Department of Human Settlements for the delays, which he said were due to late payments.

“This is not easy on us. Yes, the tender is R82 million, but we were not given all the money. Last year we were given R7 million and we used all of it. And this year we are about to finish the budget,” he said.

Ward 2 residents said that Vuikani construction told them that they were running out of material.

Mazizi said he was not aware of this.

He said the original contract in September 2015 was for 15 months, but it was extended to 31 March 2021 due to budget constraints from the department. He said the contractor had not been aware that the project would cover 17 villages. There had been further delays in the planning process and as a result of “geotechnical activities” he said.

Seventy-year-old Nomathemba Ncamile said her house had been built in early 2016.The contractor had left and come back months later in 2017 to knock the house down because of defects. It had not been rebuilt, though Vuikani had come back to the area in June this year and rebuilt two other houses.

“There are old people who are hoping to benefit from these houses and are tired of waiting,” said one resident.

Makwedini promised that by next week the contractors would be back on all sites.