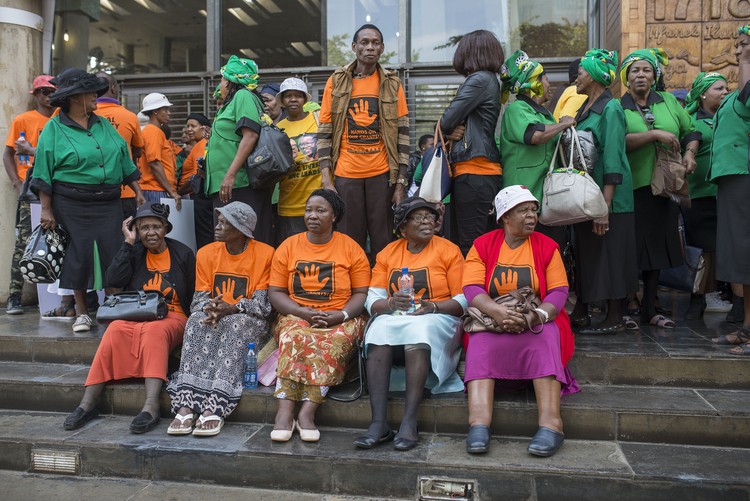 The  Constitutional Court has ordered Cash Paymaster Services (CPS) to continue paying social grants on behalf of the SA Social Security Agency for another year - at the same price.

In a judgment handed down today, the Court put an end to months of uncertainty about the payment of social grants after the present contract with CPS expires on 31 March, ruling that CPS must continue to pay the grants while SASSA made other plans over the next year.

The judges rejected arguments by CPS for a price increase. CPS currently charges R16.44 per beneficiary paid, but wanted SASSA to increase this fee and pay it as a lump sum of R4.6 billion over a contract which would last two years. However, CPS could approach the National Treasury to argue for a price increase, the judges said. The Treasury would have 21 days in which to file a report.

The judgment, handed down by Judge Johan Froneman with all the judges concurring, followed an application to the Court by the Black Sash. Arguments were also put forward by Freedom Under Law, Corruption Watch and the SA Post Office, among others.

The Court ruled that in future:

The Black Sash had asked the Court to protect the beneficiaries’ data, after complaints of deductions from social grants and widespread concerns that CPS was sharing the information with other companies in the Net1 group to which it belongs. Net1 CEO Serge Belamant has denied this.

The judges took over supervision of the new process, ordering Minister of Social Development Bathabile Dlamini and SASSA to report back to the Court every three months on progress with SASSA’s plans to take over the payment system itself or to hand it over to other contractors within a year.

On the question of profits from the social grant payment system over the next year, the judges ruled that CPS must file full accounts with SASSA, and SASSA must in turn file these with the National Treasury. CPS must give SASSA’s auditors “full and unfettered access” to its books, they said.

This follows an earlier ruling by the Court on the 2012-17 contract, in which the judges held that CPS had no right to benefit from an unlawful contract and must file statements of expenses, income and net profit at the end of the contract, leaving open the possibility that the company might have to repay its profits. Freedom Under Law had asked the Court that the same rule should apply to any new contract signed after April 2017. CPS had defended its right to profit from the contract.

The judges were scathing about SASSA and Dlamini, giving the Minister until 31 March to show why she should not pay the costs of the Black Sash application “from her own pocket”.

The Minister, Judge Froneman said, had failed to inform the Court that SASSA would not be able to take over the social grants payment system as planned. SASSA had known this in April last year and the Minister had said she had been informed in October.

“There is no indication on the papers before us that she showed any interest in SASSA’s progress before that.”

He said the Court’s role was not one of its own choosing. It followed “from the failure of SASSA and the Minister to keep their promise to this Court and the people of South Africa.”

Judge Johann Kriegler from Freedom Under Law said the ruling was “a victory not only for grant beneficiaries but for all South Africans”.

When asked if Freedom Under Law would follow up on the issue of CPS profits, Kriegler said: “The order was quite complex in that it gives several avenues with regard to profits, cost and expenses. We want to study the order and if need be will then take action.”

Corruption Watch director David Lewis said: “We’re pleased that the court only extended the period of the contract at its existing rate and conditions. It’s a real celebration of the judiciary.”

But, said Lewis, it was a pity the judiciary had been called to intervene in a matter which should have been handled by the executive.

Attempts to reach Dlamini’s office, SASSA, and Belamant for comment were unsuccessful. However, in a statement on its website this afternoon, Net1 noted the Court judgment and stated: “The Company reiterates its commitment to ensure uninterrupted service delivery to all grant recipients beyond March 31, 2017.”

This article was updated with brief comment from Net1.