Hundreds of families without services for 12 years 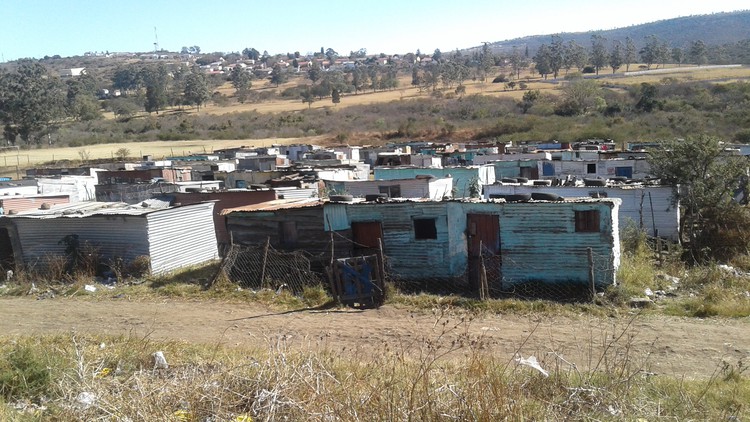 Hundreds of families were moved to this site 12 years ago to make way for a new shopping centre in Butterworth. They have been without services ever since because the municipality says it does not own the land. Photo: Nombulelo Damba-Hendrik

It has been 12 years since hundreds of families were moved to vacant land about three kilometres from the centre of Butterworth to make way for a new shopping centre.

Years later, uncertainty over land ownership has left the families currently living in Magxaki informal settlement, without sufficient water, toilets and electricity. The Mnquma Local Municipality moved them in 2007 from a site called Bhungeni which was closer to the town centre and fully serviced.

The Magxaki settlement is divided into four sections: A to D. There are no street lights and residents share four standpipe taps in the area. Many have to make a wood fire to cook a meal.

Resident Tulani Xashimba had been living in Bhungeni for nine years when they were relocated. “We thought when they moved us, we were going to get service delivery within a few months … It’s like the municipality has forgotten about us,” he said. Xashimba said crime at night was a problem in the settlement because there are no street lights.

Another resident Nolwandiso Mense said that she had recently encountered a snake while relieving herself in a nearby bush. “I quickly stood up and ran for my life. I didn’t even finish what I was doing,” she said. GroundUp contacted Mnquma Local Municipality spokesperson Loyiso Mpalantshane, who directed all questions to ward councillor Zolani Soyo.

Soyo said there was uncertainty around who owned the land in Magxaki which was causing the delay servicing the site. He said the land had previously belonged to traditional chiefs.

But when he asked about the land, Soyo said that the chiefs had told him they had already transferred ownership to the municipality. “The sad part is that the chiefs’ office burnt a few years ago and they lost all the documents. I have tried to find the papers from the municipality’s own records with no luck,” he said.

Soyo said the council official who had overseen the relocation of the families is no longer employed by the municipality. Soyo did however confirm that the municipality had agreed to service the new site once it had ownership. He has since sent letters to the municipal manager and the mayor’s office. He is yet to get a response.

“I really do not know what went wrong, but there were meetings between Mnquma municipality, residents and the chiefs. Only the municipality can save us from this, if they can find the documents,” said Soyo.

Last week Mpalantshane confirmed that the land still belonged to traditional leaders. He said the municipality will send officials to meet with residents in Magxaki where residents can raise their concerns. “It is possible that residents might be moved to a suitable place,” he said.