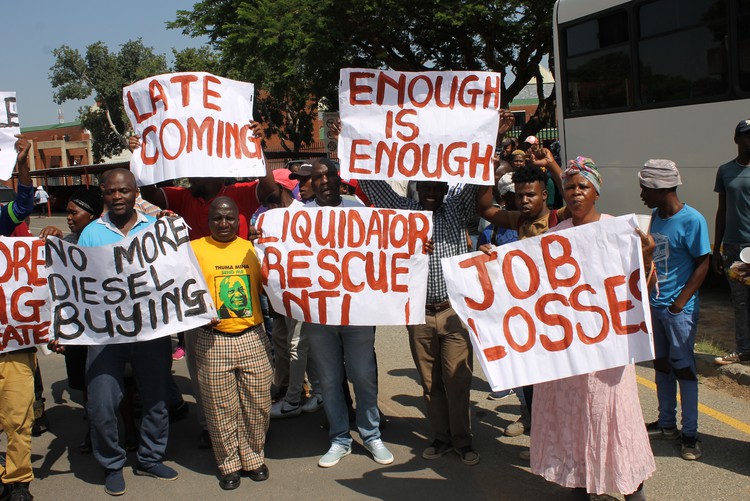 Hundreds of employees that work for a state bus company as well as thousands of passengers that use the bus service daily are on tenterhooks due to the company’s dire financial status.

This order followed an application by a creditor, Driveshaft Baleka, for the liquidation of the loss-making bus company, North West Transport Investments (NTI), after it failed to settle an R890,000 bill. NTI later paid it.

The bus company transports millions of people every year, mainly in Gauteng and the North West, but its routes also extend to Mpumalanga and Limpopo.

A vital function of the company is to transport workers to and from their Gauteng workplaces, which can be a trip of more than 200km.

On Thursday, Judge Festus Gura heard arguments from Advocate Motlalepule Rantho, on behalf of NTI, who tried to have the provisional liquidation order lifted.

However, all other parties opposed the application.

Advocate AJ Schoeman, who represented Pretoria-based Rieks Towing, which claims to be an NTI creditor, said that the court gave Driveshaft Baleka preferential treatment by allowing NTI to settle its claim. “The rest of us have to go home hungry,” she said when arguing for her client to intervene in the proceedings.

Members of the South African Transport and Allied Workers Union (SATAWU), who work for NTI, were present at the court. SATAWU represents over 1,100 of NTI’s 1,600 staff.

Chairman of SATAWU’s NTI branch, Nelson Madumo, said that the bus company was a “very sad story”. SATAWU supports NTI’s application for the lifting of the provisional liquidation order, he said.

Madumo highlighted the importance of the company getting back on its feet as he claimed that about 15 people relied on each NTI employee’s income.

Due to the company’s financial woes, one of the challenges that employees faced was that the company had failed to contribute its full share to the employee provident fund. However, Madumo said that the company paid its share in full in December.

“Given the financial position, what is needed is a cash injection, mainly to buy assets, especially buses,” he said.

To try and plug its losses, NTI last year applied to the North West government, its sole shareholder, for a R350 million bailout, according to court documents.

Outside court, a group of NTI commuters picketed outside the courthouse. Their placards read “Reliable, safe buses”, “Enough is enough”, “Liquidator rescue NTI”, “Commuters first”, “The people own NTI”, “Old buses kill our people”, “Nothing for us without us!” and “Politicians are thieves”.

Further placards — “No more diesel buying” and “No more paying toll gate [fees]” — referred to the fact that commuters claim they have had to pitch in to pay for diesel and toll gate fees on their daily rides, in addition to their bus ticket costs, due to NTI’s financial troubles.

Jimmy Lekgoathi of NTI denied that commuters had to pay for toll fees because the company uses E-tags. He said the diesel issue is being “sorted out”.

There was also a placard, “RIP Herman”, which referred to the death of a commuter last year after an NTI bus apparently drove over him.

Among the picketers was David Ratladi, president of the community organisation Inwoners Baaghi Civic Movement (IBCM). He said that three buses carrying about 200 people came to Thursday’s court hearing. He said commuters needed the bus service, despite it being erratic.

Moyagabo Rapholo, IBCM secretary general, said: “This service must be improved. It must be affordable and safe. Herman Mokgara slipped while he was climbing on an overloaded NTI bus and the rear tyres of the bus went over him. NTI showed no remorse. [The death] is business as usual.”

But NTI’s Lekgoathi said that management visited the family to offer condolences, and assistance was offered.

Rapholo said that NTI commuters were creditors of the company because commuters have bought weekly, or monthly bus tickets and the company has failed to deliver the promised service.

“If a person buys a ticket for R1,400 and for the whole month the bus doesn’t pitch up, then the company owes the person R1,400.” NTI owed its commuters an estimated R20 million for missed trips over the past two years, he added.

But NTI’s Lekgoathi told GroundUp: “We are contracted to the Gauteng Department of Transport and we are penalised for all trips not operated. There has never been a situation where commuters were neglected and left without transport. There is no obligation by the company to pay any passenger.”

IBCM has employed an advocate, who intervened at Thursday’s hearing.

“We are not comfortable about how the politicians have run this company. We can’t trust them to get us out of this mess,” he said. “[Commuters] get up early in the morning. By 3am or 4am they are already on NTI buses.”

“The NTI coffers are controlled by the North West government, which does not care about the people. For the past two years, the service has been abysmal. They are operating 600 routes with 250 buses.”

NTI’s Lekgoathi responded: “Not all routes are covered but management at ground level is doing everything possible to transport commuters on daily basis.”

The NTI commuters established their representative organisation in 2014 and IBCM has been representing the commuters since April 2019.

This article was updated after publication with NTI’s comments.