“Now I have to borrow [money] again for this unpredicted situation” 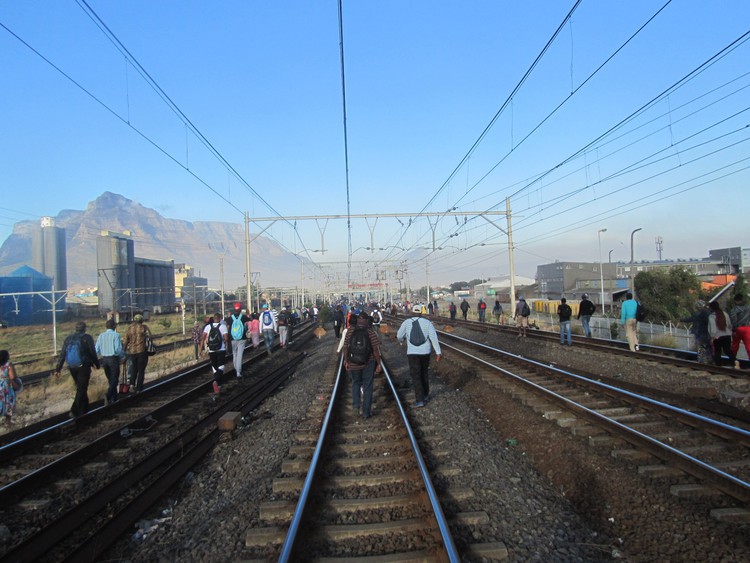 Commuters abandon a Metrorail train in February. They had to crisscross the railway tracks for about half a kilometre to get to the next platform. Archive photo: Bernard Chiguvare

Metrorail Western Cape published a statement on Sunday night that its Central line in Cape Town has been suspended until further notice. This is the line that takes working people in Khayelitsha to their jobs in the city centre.

GroundUp visited the Manenberg taxi rank early on Wednesday. It was abuzz with people from Sweet Home Farm, Mannenberg and Nyanga who usually make their way to work using the nearby Nyanga Junction train station (on the cancelled Central line).

Commuters complained that not many taxis at the rank made direct trips to the city centre. We saw just one taxi making the direct trip between 6:45am and 7:30am.

A Cape Town-bound taxi arrived at 7:15am and people stampeded into to it to get to work on time.

“Brother it is do or die here. If a taxi comes, I have to secure a place otherwise I will lose my job,” a man holding tightly onto his bag says, as he prepared to jump in the taxi.

“This is very expensive for me. I had a R175 monthly Metrorail ticket to town. Now I have to borrow [money] again for this unpredictable situation,” said a woman rushing to borrow money for her trip home later that day.

Commuters explained their only options were to wait for a taxi and fight for a seat or spend R8 getting a taxi to Gugulethu Shopping Mall or Heideveld ranks where they could the get another taxi for R12 to the city.

Metrorail has arranged for their passengers to be able to use Golden Arrow buses using their monthly and weekly tickets, but only during off-peak periods.