Women say they are groped and robbed 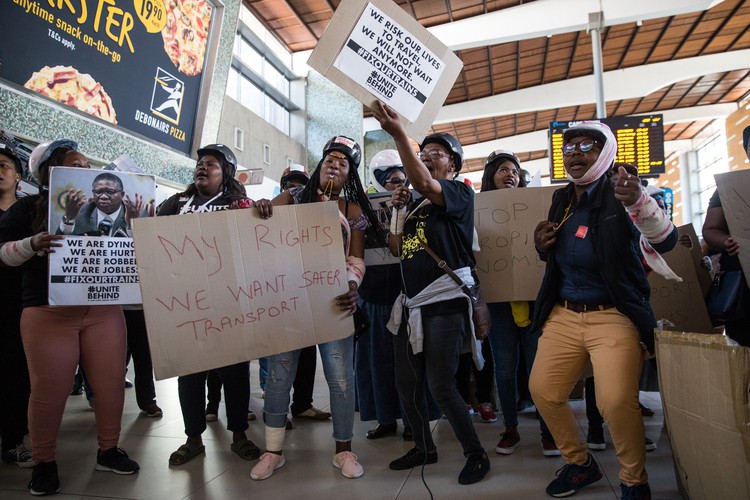 Commuters gathered at Cape Town station on Thursday to protest against violence against women and children on public transport. Photo: Ashraf Hendricks

About 150 commuters gathered at the Cape Town central train station on Thursday calling for safer public transport for women and children.

Organised by civil society organisations Sonke Gender Justice and #UniteBehind, protesters wore bicycle helmets and bandages, blew whistles and sang in the station. Some held placards against gender-based violence (GBV): “End GBV on trains” and “Women are being victimised”.

She said that because the trains are overcrowded, women are being groped and pick-pocketed. In taxis, she said, women are touched and harassed.

Using a projector, a short video was aired in the train station. The video showed crowds of people squeezing into packed trains and a number of women sharing their experiences of using public transport, saying they had been harassed, robbed and attacked.

Protesters then marched to Parliament to read and hand over a memorandum of demands, asking Parliament’s Transport Committee to make a commitment to address gender-based violence, with safety plans for all public transport, including taxis and buses, also trained security guards and temporary Metrorail carriages for women and children only.

The memorandum was collected and signed by an official of the National Assembly.

Mabaso said they would expect a response within a week.