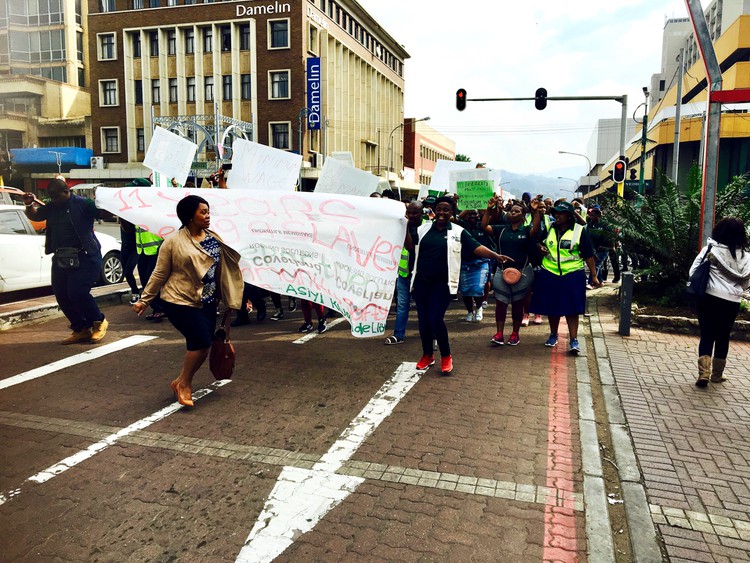 Volunteers in the Department of Community Safety and Liaison marched to the head office in Pietermaritzburg on Thursday. Photo: Nompendulo Ngubane

About 150 community safety volunteers from several districts in KwaZulu-Natal marched to their department’s head office in Jabu Ndlovu Street, Pietermaritzburg, on Thursday.

The protesters, who were hired by the Department of Community Safety and Liaison under its Volunteer Social Crime Prevention Programme, are demanding that they be permanently employed. But the department is cutting their salaries from R2,100 to R1,600.

Londeka Sitholefrom from ITheku district, who has been working for the department for 11 years, said, “As volunteers our job is risky. We are the eyes of the police in the areas we are deployed to. The department has been paying us peanuts.”

“Our duty is to report crime in our areas. We work with the police in doing that. The same volunteers who are ill-treated, are the same ones who are whistleblowers. Some of us are called spies in our communities. We have incidents where some of our colleagues have been threatened at their homes. That has been reported to the department, but they have done nothing,” said Sithole.

“We have done training, but we have never received certificates. As the volunteers we are facing crime incidents every day. They [department officials] have no clue as to what is going on … Crime statistics in South Africa are high. We are the ones who are trying to fight that. They are not grateful; they treat us like dogs … They only supply us with a T-shirt and a hat once a year … It is an insult,” said Khanyile.

A memorandum was handed to the head of the department, Themba Mavundla.

Mavundla told the protesters that some volunteers on other government programmes were not even getting a stipend. “You should be grateful you have stayed in the department for 11 years … We don’t hate you and we appreciate you. The department has a budget of R33 million for volunteers. We know that is not enough. We will look at all the grievances in the memorandum,” said Mavundla.

He promised that the department will respond before 13 June. “We will also visit you in your districts,” said Mavundla.

He said MEC Mxolisi Kaunda, who was unwell, would see the volunteers on Tuesday in Durban.