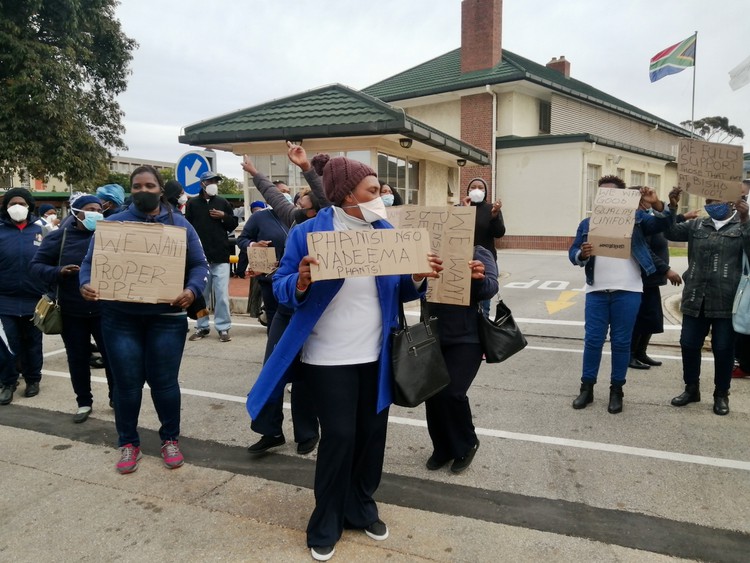 About 80 community healthcare (CHC) workers stopped work on Monday and protested outside the district offices of the provincial Department of Health in Port Elizabeth. They were demanding better wages, permanent jobs, protective personal equipment (PPE) including N95 masks.

Mzikazi Nkata, provincial coordinator for Young Nurses Indaba Trade Union (registered in 2017), said, “In 2018 a resolution was taken at the bargaining council that all the CHCs should be absorbed by the health department. On 14 June this year that resolution was supposed to have been implemented.

“In Gauteng, we have been informed and seen the proof that the workers there have been employed permanently. Their living wage has improved. Their first salaries were paid last month. They even showed us that after deductions such as pension and UIF they were taking home about R8,000.”

“Now, we are here and we want to know why those resolutions have not been implemented in this province because it applies to all the CHCs in this country,” she said.

“We were here on 6 July and handed our memorandum to Dr Mbengashe. He promised to respond after seven days. But we waited in vain and decided to come back on 16 July. Instead of meeting Dr Mbengashe, the police dispersed us with rubber bullets. Then on 28 July we approached the office of the Premier. It also promised to arrange a meeting between us and Dr Mbengashe, but until now that never happened.”

She said the workers were registered as government employees but had no UIF, pension fund or medical aid. They had been working under these conditions since 1992, At first, under contract until 2012 with municipalities, and thereafter with the Department of Health.

“When you retire or die there is nothing you take home. Your family and kids would be left with nothing,” Nkata said.

Healthcare worker Pumla Matinise said, “Since 1999 I have been working as a contract worker here earning these peanuts … Our working conditions are too depressing. We are faced with this pandemic but the Department is still reluctant to improve our working conditions.”

Asked to comment, provincial health spokesperson Siyanda Manana said, “Who are those people? We don’t know them … This is a Bargaining Council matter because it affects all the provinces. The recognised unions know very well about what is happening. We have been engaging with unions like NEHAWU, PSA, DENOSA and others.”

GroundUp tried repeatedly but was unable to reach Dr Thobile Mbengashe for comment.