Coal miner community shows the beautiful side of SA

Shafted by the Guptas, the people of Blinkpan, Mpumalanga have come together across race and class to help each other 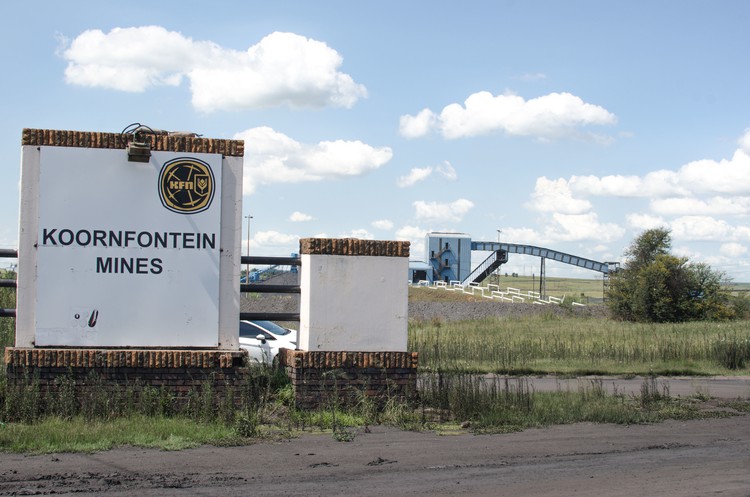 Workers of the formerly Gupta-owned mines have set up a non-profit organisation called Feed the Miner to support each other. All photos: Ciaran Ryan

It was a dismal Christmas for thousands of coal miners in Mpumalanga when the formerly Gupta-owned coal mines of Optimum and Koornfontein, now under business rescue, stopped paying workers and contractors in October last year. It was the same story for workers at other nearby mines: Woestaleen, Boschmans, Klipbank, Setemba and Sandile.

In December a group of determined women, all of them employees of the nearby coal mines, decided to do something about it.

They set up a non-profit organisation called Feed the Miner and approached local businesses and farmers for donations. Six weeks later the organisation is providing food and grocery hampers to 650 families.

All of this is being run out of the Blinkpan home of Christo Mostert, a production foreman contractor at Koornfontein. Scores of miners and their families gather at his house twice a week to receive grocery hampers that should keep them going for a few days. Miners of every race join hands in prayer to give thanks for these modest blessings. They are surprisingly cheerful, given the miserable conditions they now find themselves in.

When the formerly Gupta-owned mines were placed under business rescue in February last year, staff never knew from one day to the next whether they would be paid. When the salaries stopped coming in October, so too did their pensions and medical aid. Many workers have had to borrow from family members to pay lights and water. There were no presents for the children at Christmas and no books or uniforms at the start of the 2019 school year.

There was jubilation in Blinkpan last week when a group called Project Halo was announced as the preferred buyer for the Optimum and Koornfontein mines, and the hope is that the R3.6 billion deal will be concluded within the next week or two.

“Project Halo was assessed as the best bid on the table, and of course we want to wrap things up as fast as possible so workers can get paid, but unfortunately there is a process that must be followed and certain legal steps must be taken first,” says Louis Klopper, business rescue practitioner for eight Gupta companies (including Optimum and Koornfontein) placed under administration when the major commercial banks distanced themselves from the Guptas.

In a statement issued this week, Project Halo said a priority is to “get the workers to keep their jobs, provide backpay and generally get their morale back again”.

One of the stumbling blocks to wrapping up the deal is an outstanding R2 billion fine imposed by Eskom for the supply of sub-standard coal under previous management. Eskom itself faces dire cash flow problems and wants every rand it can lay its hands on. Optimum was a major supplier of coal to Eskom, but at a price that was below its production costs. Under business rescue, coal that previously went to Eskom was shipped abroad where prices are better. Another priority for Project Halo is to fix the relationship with Eskom and other clients. 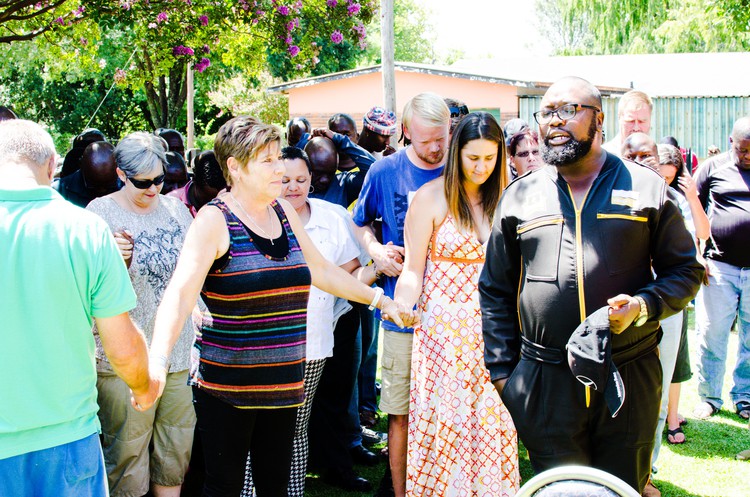 People join hands in prayer at a Feed the Miner meeting.

While the business rescue process continues, miners have little option but to find ways to survive. So the feeding programme has stepped into higher gear, with many more farmers and companies coming on board in support. But it is still nowhere near enough to feed several thousand mouths.

Feed the Miner was started by Anna Swannepoel, a legend in Blinkpan and surrounding towns for her work with children with drug problems. Her employment contract prohibits her from talking to the press, so her friends and colleagues do the talking for her.

“She is a hero,” says Annah Ntsabeng, whose husband is a shift boss at Koornfontein. “If someone is in need, she cannot turn away.”

Ntsabeng has seven people living in her house, so the food parcels are a life-saver for her family.

The miners paint a bleak picture of life under the Guptas, confirming Klopper’s repeated claims that the Guptas stripped the mines of cash and endangered the lives of workers in the process. Miners were sent underground without proper safety gear. Money that was meant to go on equipment maintenance was diverted to Gupta-controlled accounts.

“If you go to the safety store, you won’t even find a pair of gloves,” says one miner, who asked not to be named.

In this small corner of South Africa, a community has transcended race and class barriers by coming together to help each other. In the midst of their individual travails, they have found common cause. It is a beautiful vision of what South Africa can be.

Financial donations to Feed the Miner can be made to Standard Bank savings account 10112513725 (branch code 051001, reference: Feed the miner). (GroundUp takes no responsibility for how the funds are spent.)
Website
Facebook page