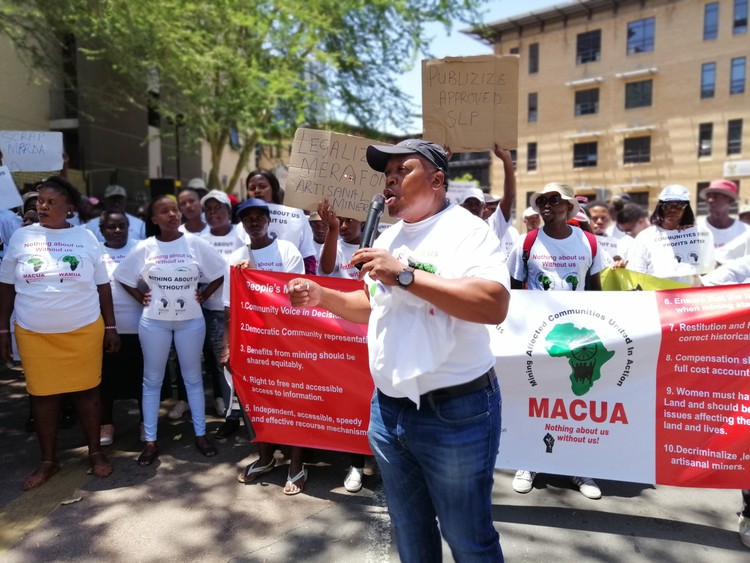 March convener and national co-coordinator of Mining Affected Communities United In Action (MACUA), Meshack Mbangula, called for two draft pieces of legislation dealing with mining to be scrapped at a protest in Pretoria on Friday. Photo: Mosima Rafapa

About 300 people from communities affected by mining picketed outside the Department of Mineral Resources (DMR) in Pretoria on Friday. They were protesting what they considered to be the failure of the DMR to consult mining-affected communities before releasing two important bills for public comment.

The two draft pieces of legislation — the Mineral and Petroleum Resources Development Regulations and Mine Community Resettlement Guidelines — were initially opened for comment on 28 November and 6 December until 27 December 2019 and 4 January 2020 respectively, but this was extended to 31 January 2020 after civil society pressure.

The protesters handed over a memorandum and their comments on the draft bills to the DMR’s Chief Inspector of Mines, David Msiza.

The picketers chanted while they held placards saying, for example, “Community first, profits after”.

Protest convener and national co-ordinator of Mining Affected Communities United In Action (MACUA), Meshack Mbangula, said it was unfair for the DMR to release the two draft regulations before the December holidays and add a deadline of less than a month for public comment.

“When the DMR amends laws, it does not consult with communities adequately,” Mbangula said. He called for requests for comment on mining bills to be advertised on local radio stations and newspapers. He also called for both draft pieces of legislation to be scrapped. “We will have more problems [if this legislation is implemented]. People will be forcefully removed from their houses, especially in rural areas by the so-called foreign direct investors. We have our local direct investors who can create more jobs.”

Elton Thobejane, Chairperson of the Mining and Environmental Justice Community Network of South Africa, said: “Communities must be given enough time to participate in policy making processes. At the centre of everything is the issue of consent because the DMR is talking about the resettlement bill.”

“Our members and communities, because we come from mining communities, get removed or resettled from one point to another without proper consultation,” said Thobejane.

Msiza, upon accepting the memo, said: “We would like to assure you … that any concerns that you have, any reservations that you have, we take them seriously. It’s important to outline the legal process. It does not necessarily mean that if there’s a piece of legislation … that has been gazetted that that is the end of the story.”

“We gazette for inputs and we take any input made very seriously. And we don’t only consider written inputs. So the process moving forward as a department is that we’ll also come to your respective communities and engage with you [and find out] your challenges and suggestions,” said Msiza.