Eastern Cape villages have had no water for almost two weeks 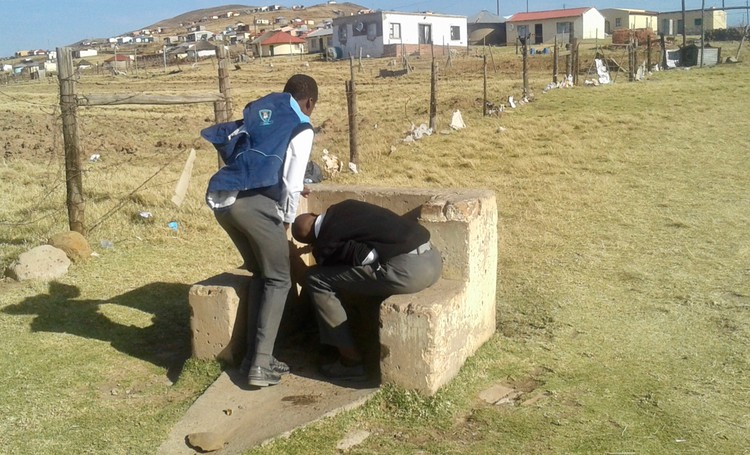 Some schools have been left without water for almost two weeks in the Cofimvaba area. Photo: Nombulelo Damba-Hendrik

A broken water pipe has left a number of villages with no water for almost two weeks in Cofimvaba, Eastern Cape. The problem started on 22 July. GroundUp was in these villages from 26 to 31 July and there was no water.

At the time of publication, 2 August, water had not yet been restored.

When we visited Duli Primary School in Luxhomo village, learners said the school had told them to bring their own water from home. But their homes are also without water.

A learner said he had been at school since 7:30am and will leave at 2:30pm without having had any water to drink. “I was hoping that this tap has a little water since it is also supported by a small tank,” he said, kneeling at an outside standpipe near the school.

When the school asked Chris Hani District Municipality to deliver water to them, they were given a quotation of R1,000.

“The municipality has no obligation to transport water for those schools at no cost,” said municipal spokesperson Thobeka Mqamelo. She said it was the responsibility of the Department of Education. She said water is provided for communities and schools benefit because they are part of the community.

However in Luxhomo and Magwala villages there was no water for the community either.

Mandungwana Mhlanga of Magwala said: “This area has no river and even the small dams we have are for animals. No one can drink that water.”

“Since last week I have been surviving with the three 20 litre cans I got when water came back for a few hours. I only use it to cook and drink. My three grandchildren are using one wet towel to wash,” she said.

Mqamelo said the municipality is working around the clock to repair the damage. She confirmed that the water problem started on the 22 July. She said Magwala and Luxhomo are supplied by Tsojana Dam. An electricity outage had meant water could not be pumped to all areas fed by the dam. On 25 July, electricity was restored, but on 29 July a water pipe burst, she said.

But there was no water there in the time that we were in the villages, which included the period from 26 to 29 July.