“Once they climb the ladder, they forget about us” 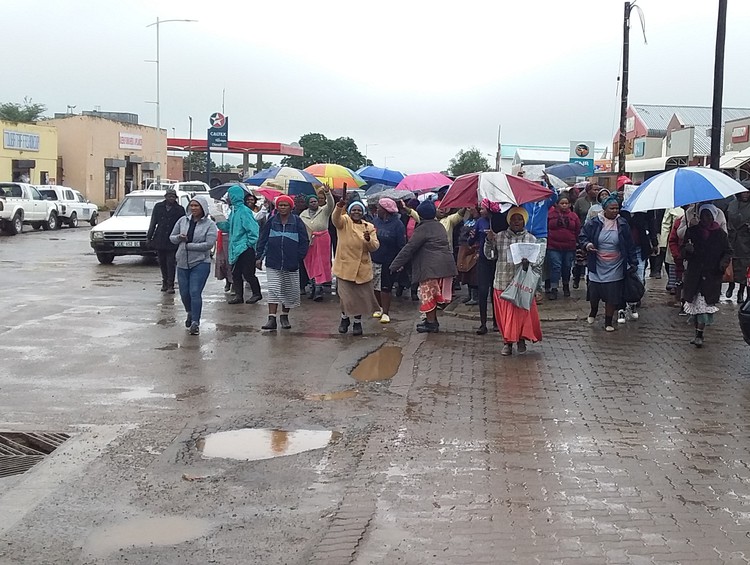 They accuse the municipality of only working during election campaigns and of disappearing when the campaigns are over.

Security guards locked the gates of the municipal offices refusing to let anyone in. An official came to address residents saying that Cengani was not available and they should come back another time. Municipal services were suspended.

Protesters chanted and sang, refusing to leave until they saw Cengani. According to the protesters, who were mostly elderly people, last Monday delegates were sent to deliver a memorandum to Cengani’s secretary Vuyokazi Khwaza, demanding toilets, houses, water, jobs and roads.

The protesters said they were fed-up with living in leaking shelters, especially now that it has been raining.

Simphiwe Khandekani from Joe Slovo said: ‘’We are struggling in our villages while our mayor doesn’t even care about us. We are the ones voting for them, but once they climb the ladder, they forget about us and that is why I am done with voting.”

He said roads needed attention and residents had to relieve themselves in the bushes because they did not have toilets.

‘’We have been watching our municipality for the past four years taking the services to other villages, leaving us behind with nothing,’’ he said.

Residents were complaining of poor services not only in the villages, but the main road in the town is full of potholes causing traffic congestion.

The crowd started to lose patience and threatened to jump the locked gate.

Then the municipal official came back instructing residents to delegate five members to deliver their memorandum to Cengani. The remaining residents were given pamphlets by municipal guards inviting them to an event to be held by the Department of Employment and Labour and the Chris Hani District Municipality.

Residents started shouting at the guard that the pamphlet was being used to silence them.

After receiving the memorandum, Cengani told the delegates to come back on 3 March for answers.