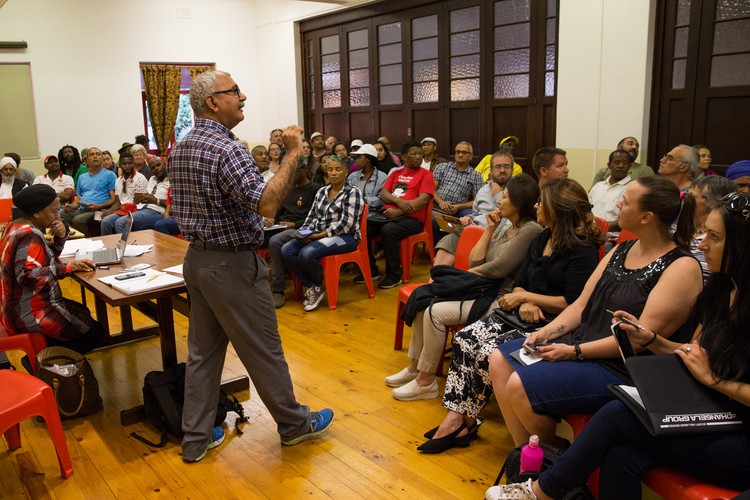 Shaheed Mahomed of Workers’ World addresses a coalition meeting to discuss the City’s plans for the drought. Photo: Ashraf Hendricks

Members of civic organisations have called for new measures to save water, protesting against the City of Cape Town’s proposed drought levy and the use of water management devices.

The meeting of the Interim Water Crisis Coalition expressed the concern that City of Cape Town could be using the water crisis to privatise water.

The coalition has complained about water management devices which it says are often defective and sometimes leave households without water for weeks.

Ebrahim Fourie, a member for the Housing Assembly and of the Beacon Valley Resisting Water Meters Organisation said that where he came from, people did not believe there was a drought.

Another concern was the drought levy. “We are going to pay a drought levy because those in power, who had to plan the water demand and usage of the city have not done so. They have failed us,” said Faldiela De Vries, a Manenberg community leader.

The drought levy, announced in December, is intended to finance new water supplies. It is to be based on property values.

Last week, Mayor Patricia de Lille announced that at least 150 million litres of water could be delivered from the Cape Flats, Table Mountain Group and Atlantis Aquifers. “Day Zero”, when most taps in the city run dry, is currently set to April 22 2018.

Nazeer Sonday, a farmer and member of the Philippi Horticultural Area Food and Farming Campaign said farmers were using water in “unsustainable” ways. “Agriculture uses 60% of our water, and that can be reduced way down, even to 30%, if we reform the way we farm,” he said. This could be achieved by using waterwise plants, and by recycling storm and sewage water to supplement the aquifers.