#ClimateStrike protests held across the world 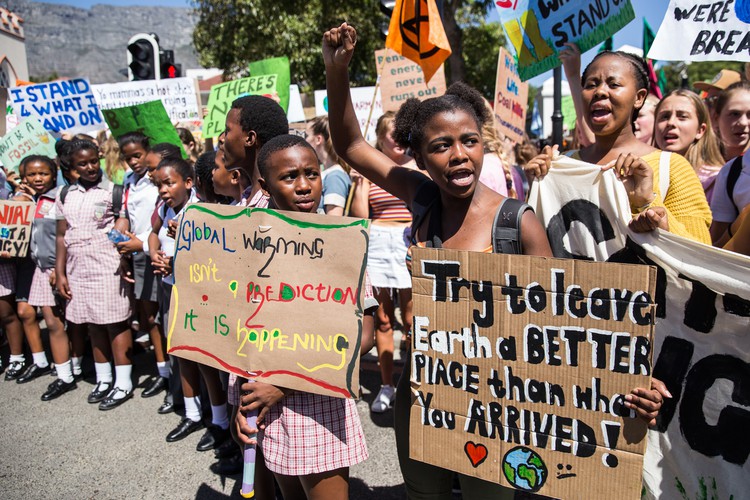 Thousands of school students across South Africa called on government to act against climate change. Youths demonstrated at Parliament in Cape Town, the Union Buildings in Pretoria, and the Department of Energy in Durban.

Similar protests are taking place on Friday in Europe, Australia, New Zealand and North America. The worldwide effort has been organised under the hashtag #ClimateStrike. 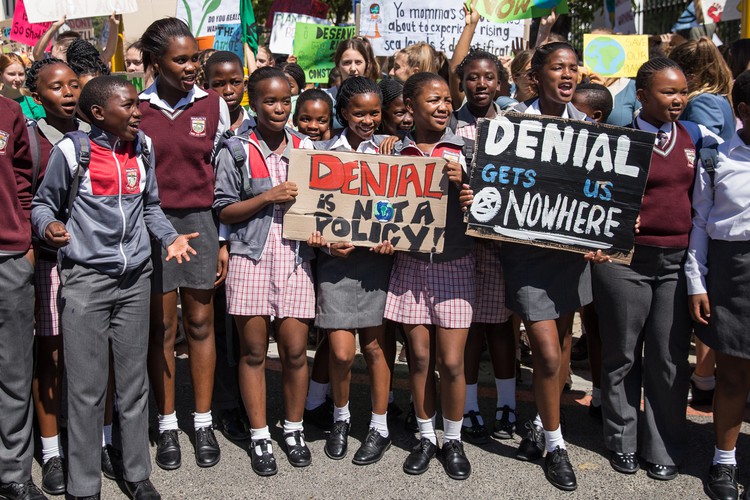 In Cape Town, over a thousand learners from numerous schools across the province gathered with bright coloured posters outside Parliament. They chanted, “Stop denying! Our earth is dying”, “Mother earth, can we fix it? Mother Earth, yes we can!” and “Change your mind, not your planet.” 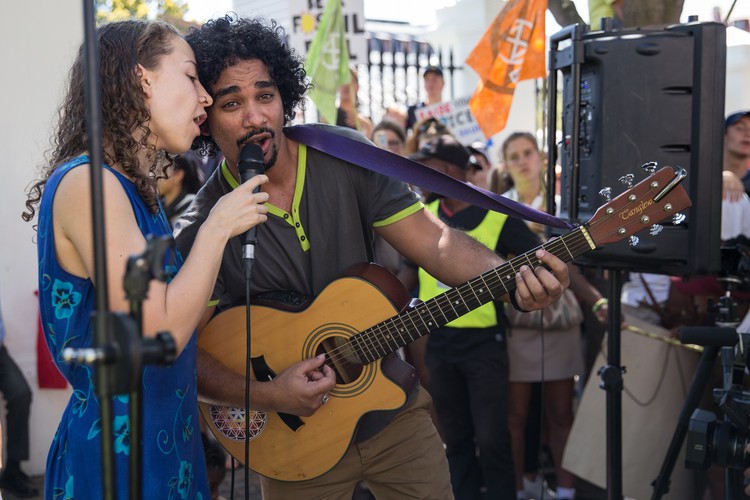 Sarah Farell and Nur Felix performed Bob Marley’s “Get up, stand up”. Farrel, one of the organisers, said that the protesters were demanding that government halt new fossil fuel projects. They also called for much more renewable energy by 2030. “We want it to be right, front and centre, because it is exacerbating poverty. It is making peoples lives worse,” she said. 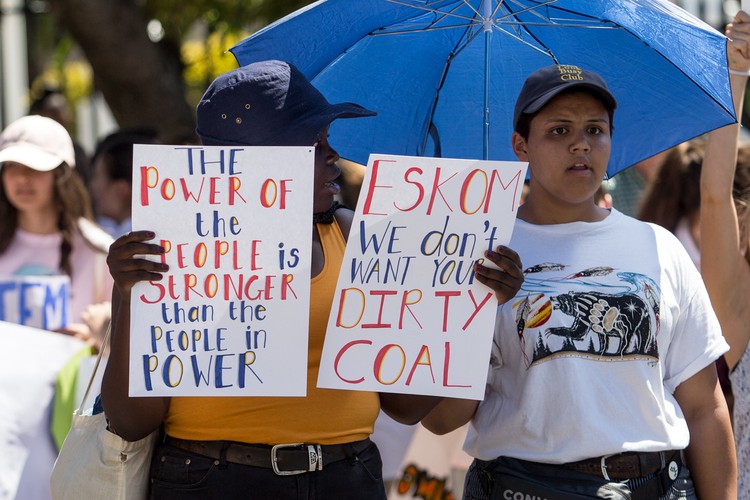 There were many placards with pithy messages. Photo: Ashraf Hendricks

During the 2019 Budget Speech, Minister of Finance Tito Mboweni acknowledged the seriousness of climate change. He said that steps are being taken at Eskom to expand renewable energy. He promised that a carbon tax would be in effect by 1 June 2019. 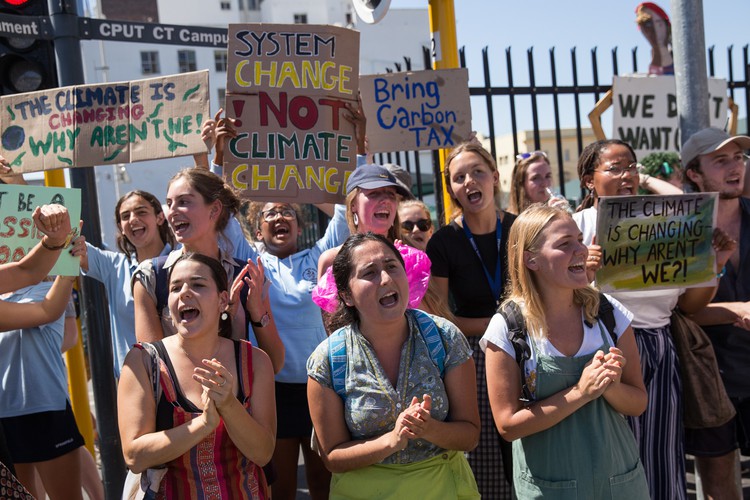 The participants were from a wide cross-section of South African society. Photo: Ashraf Hendricks 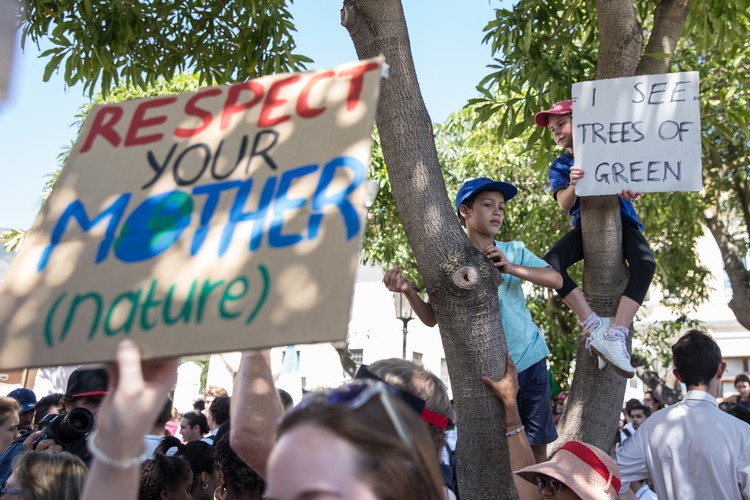 The child on the left climbing this tree had an apt message. Photo: Ashraf Hendricks

“When I was 11 years old, my parents took me on a trip around Africa, and because of that, I felt first hand the dramatic effects of climate change,” said Ruby Sampson, a Grade 12 student at Wynberg girls high. Inspired by Greta Thunberg, a 16-year-old Swedish climate activist, Sampson joined the movement and started organising Cape Town to join the global protest.

Thunberg started the #FridaysforFuture movement in August 2018. The movement mobilises learners across the globe to protest against climate change on Fridays.

“Politicians have been ignoring it for generations but you have activists and scientists that have been telling us that this has been coming for many decades,” Sampson said. Looking around, she said about the protest, “It’s overwhelming but fantastic” that all these people have joined. 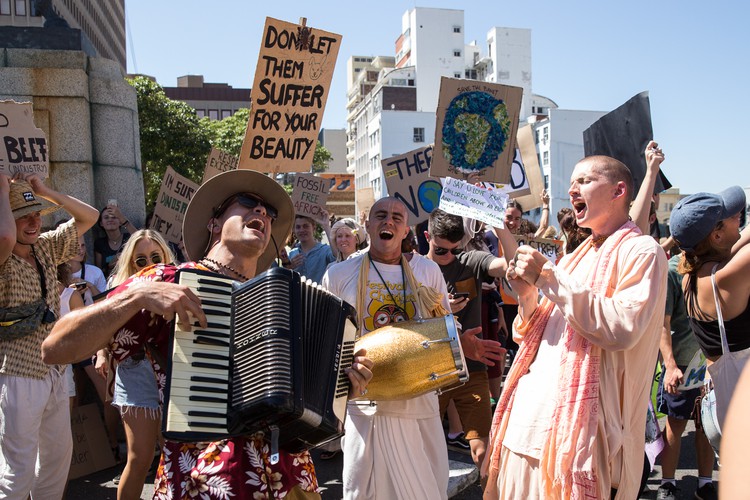 Members of the Hare Krishna faith also joined the climate strike and got people to dance. Photo: Ashraf Hendricks

“Climate change is important for the youth to care about because we are the ones who will be affected by it. It might not affect us right now but it is going to affect our future and if we don’t do anything about it, we might not have an earth to live on,” said 14-year-old Nonku Ncube from St Mary’s Diocesan School for Girls.

The group chanted “Tax the polluter”, “We don’t have a planet B” and “Keep the oil in the ground”.

An organiser of the protest, Chris Engelbrecht, who is also a physics professor at the University of Johannesburg, told GroundUp that climate change was going to affect everyone but particularly poor people, who will not be able to protect themselves from the shortage of food and other outcomes. 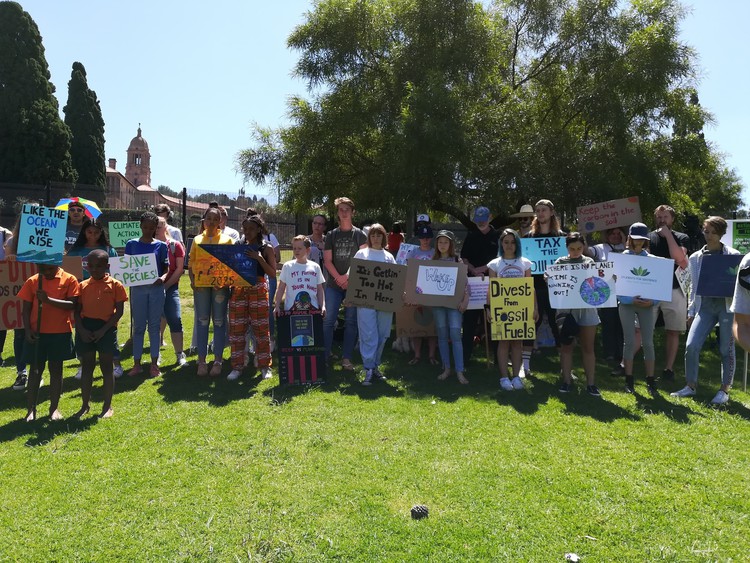 Protesters gathered on the lawns of the Union Buildings in Pretoria. Photo: Zoë Postman

Alycia Hibbert, a student at the University of Pretoria, also said she was inspired by Greta Thunberg. “I never understood how little time we have left, for Africa specifically, because we don’t have the resources or structures in place to deal with the disasters to come,” she said.

She said the government should be promoting sustainable environmental practices, particularly in the farming and electricity industries. “For farming especially, a lot of our carbon footprint can be reduced depending on the way we do our meat production … And on top of that, we don’t recycle and manage our waste the way we should,” she said.

Engelbrecht said the environmental crisis was dire and the South African government had about a decade to turn it around. “But for that to happen, government needs to change all coal power stations to renewable energy right now … There is money for it and there are solutions but it’s about the political will.”

He said the biggest challenge was the fear of losing jobs, but he said government needs to start training people for renewable energy sectors now so that when the transition happens, people will not be left jobless.

Nicole Rabie, from an organisation called Extinction Rebellion, read out a letter urging government to make climate change an important part of its policies for the 2019 election. The letter said it appreciated the government signing the Paris agreement, an international commitment to tackling climate change, but many of the plans were vague. 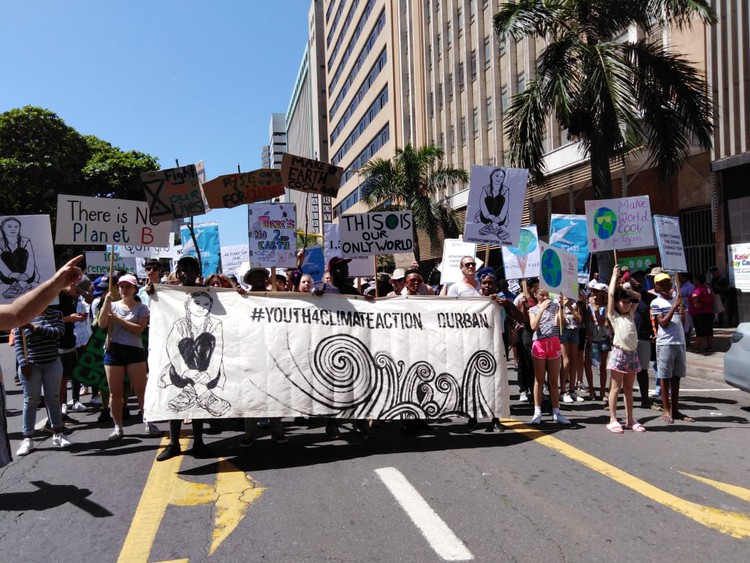 Youths marched through the the centre of Durban to the Department of Energy. Photo: Musa Binda

In the centre of Durban, about 250 young people braved the scorching sun and marched from the Marine building to the offices of the Department of Energy. There was one message for the department: “Wake up!” and see what climate change is really about.

Janet Samson from Oceans Not Oil, one of the organisations behind the protest, said, “Government needs to start shifting it’s mentality, to start understanding and listening to the scientists. They need to shift their policy to accommodate the issue of climate change.”

A representative from the Department of Energy, Zukiswa Mthimkhulu, signed the memorandum of demands. She promised that she would take it to the right people in the department.

CORRECTION: The article originally had the wrong name for Extinction Rebellion.