“The gathering was peaceful and no-one was causing any trouble” 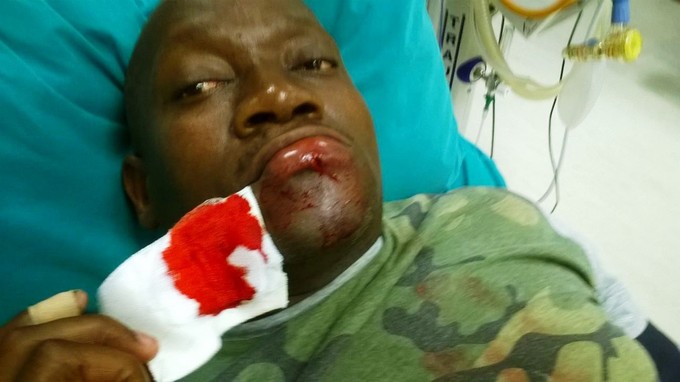 Sibusiso Khanyile was shot in the mouth during a meeting on the Pietermaritzburg campus. Photo supplied

A civil society leader was shot in the mouth during an argument with police at the University of KwaZulu-Natal campus in Pietermaritzburg on Monday.

Sibusiso Khanyile, a facilitator from the Pietermaritzburg Agency for Community Social Action (Pacsa), said he was shot during a peaceful public dialogue to discuss the way forward at the university.

Two lecturers and five students were arrested at the meeting.

Pacsa is a faith-based social justice and development organisation operating in the uMgungundlovu region since 1979.

Speaking to GroundUp from his hospital bed, Khanyile said the meeting, to discuss the Fees Must Fall campaign and the state of the university, was also attended by parents of students.

“The lecturers were also present at the meeting that had about 200 attendees, including some students. The gathering was peaceful and no-one was causing any trouble. Police came and told us that the gathering was illegal and that we were violating the High Court’s interdict. We explained to them what the meeting was about.”

“After they had made that approach they started shooting. I asked them why they were shooting at parents and other people at the meeting. After I had asked that, they continued with shooting. While others were shooting, one police [officer] shot me in the mouth. It was at close range and I had done nothing which could have caused him to shoot at me,” said Khanyile.

“Students then started whistling and ululating after seeing what was going on. Then rubber bullets were fired at people and they had to run,” he said.

A student who was not part of the meeting said the gathering had been peaceful.

“I was not part of the meeting and I have never been part of the protest either. We were all surprised by the shooting because we were not expecting it. They had their meeting peacefully; they only started shouting when the police started shooting,” the student said.

“Some of us really wish that this was over. The institution is like a hooligan’s place. It’s scary, one would not think that there are students studying in that institution. Sometimes police just barge in the passages with their guns, out of the blue, and it’s scary. Police are here 24 hours but they are the ones scaring us to death,” said the student.

Brigadier Selepe Mashadi, a spokesperson for the national commissioner of police, said the claims of police shootings were being investigated and no public comments would be made.