City puts an end to land occupation in Mfuleni

Desperate and unemployed mother says she has “nowhere else to go” 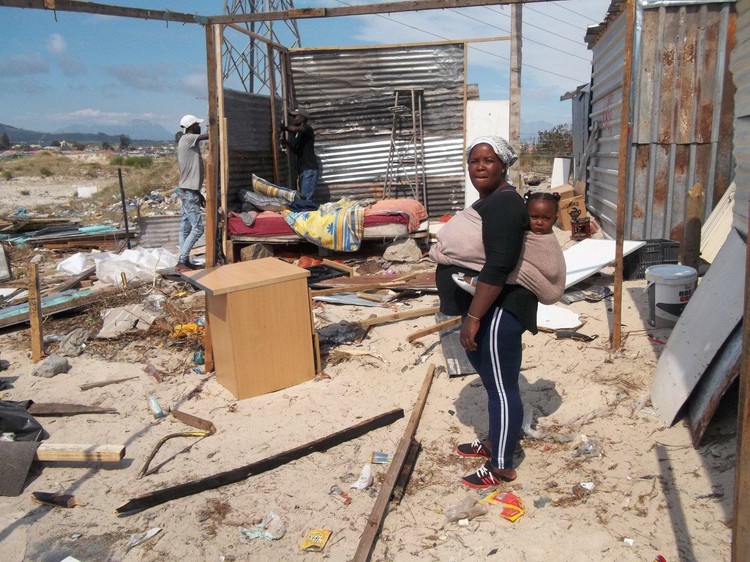 Nomaphelo Mdanjelwa is six-months pregnant and lives with her two children aged three and five. She said she has battled to survive since losing her job as a grape picker in May 2018.

“My kids don’t get a government grant because they have no birth certificates so I don’t even have money to buy food,” said Mdanjelwa.

She said she was at Home Affairs in Bellville to apply for birth certificates for her children when her shack was demolished. “When I came back from the department I noticed that the spot where my shack stood was vacant and my building materials were gone. My heart aches.”

She relies on friends and relatives for food and other basic necessities and has asked them for unused corrugated iron and poles to rebuild her shack as she has “nowhere else to go”.

Phindeka Mambela, 30, was a backyarder in Extension Six before she built her shack on the land. She said she paid her landlord R350 for rent and R100 for electricity on a monthly basis.

“I lost my job as a cleaner in Killarney two years ago,” said Mambela. She said she now works as a stand-in domestic worker in Blouberg but doesn’t earn enough money to pay rent. She has two children.

Malusi Booi, the City’s Mayoral Committee Member for Human Settlements, confirmed that the City had removed 15 structures from the land. “The City’s Anti-Land Invasion Unit will only remove unoccupied illegal structures. This does not require a court order,” said Booi.

“Every municipality in South Africa acts to protect land from invasion” as it can “get in the way of service delivery and economic development”. He said that illegal occupations often occur on land that is unsuitable for human habitation, preventing the City from legally providing services to the residents.