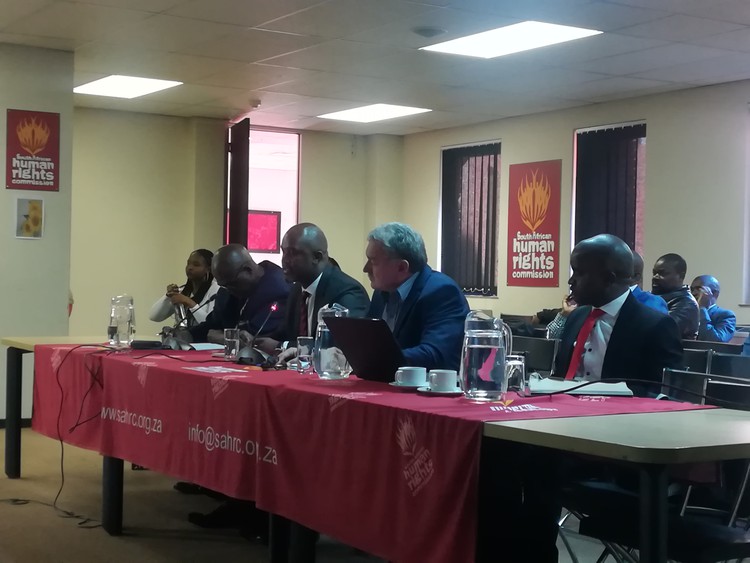 Sibusiso Mthembu (behind the lit microphone) Head of Gauteng Water and Sanitation Department, made submissions on the state of water and sanitation in Alexandra at the SAHRC inquiry on Wednesday. Photo: Zoë Postman

The City of Johannesburg has neglected water and sanitation in Alexandra, according to Head of Gauteng Water and Sanitation Department Sibusiso Mthembu.

“I can’t generalise about other townships in Johannesburg because they might have good sanitation, but the City has definitely neglected sanitation in Alexandra,” said Mthembu.

Mthembu was speaking at the inquiry into Alexandra by the South African Human Rights Commission (SAHRC) and the Public Protector’s office on Wednesday. This week is the third sitting of the inquiry.

The inquiry follows a spate of protests in April. Its purpose is to consider some of the issues raised during protests, such as the lack of housing, water, sanitation and overcrowding in the township. The inquiry will also look into allegations of corruption in the Alexandra Renewal Project (ARP) – a project initially worth R1.3 billion, launched in 2001 to develop Alexandra.

Mthembu said the City had failed to implement sustainable solutions for sewerage and water waste management in the township.

He said the department would approach the City with a master plan regarding water and sanitation but the City would only address the problems as they arise rather than developing sustainable measures.

He made an example of the Alexandra hostels – the accommodation formerly used for migrant workers under apartheid. In prior sittings of the inquiry, the panel heard submissions that there was open raw sewage outside the women’s hostel.

Legal officer on the panel, Harriette Buga, said: “We had an inspection and the sewer pipes are still bust and the water tanks are overflowing which is dampening the walls of the hostel … What has the department done in these hostels?”

Mthembu said the department had given the City about R32 million between 2009 to 2011 for a number of projects including fixing the water pipes and connections to the main sewer pipes in the hostels. “But if you go there now, it’s as if nothing was ever done,” he said.

This was a failure by the City to implement sustainable solutions which resulted in recurring problems, said Mthembu.

He also said the overflowing manholes in Alexandra were “completely unnecessary” and the lack of maintenance by the City was contributing to poor infrastructure in the township. “We are now considering not to fund bigger cities and funding smaller municipalities instead,” he told the panel.

He said the department was “certainly not happy” with how the wastewater was being managed in the area.

Mthembu made reference to an informal settlement that was built on the banks of the Jukskei River in Alexandra where water pipes bypassed the main sewer line and filtered directly into the river.

He said it was the City’s responsibility to enforce by-laws to prevent people from building on the banks and polluting the river.

Mthembu told the panel that the “bucket system” or pit toilets had been eradicated. But, he said, it was still a “complete disgrace” to have chemical toilets in Alexandra “just a stone throw away from Sandton”.

When asked by Matthew du Plessis, one of the legal officers on the panel, whether the department could issue directives to the City to come up with more sustainable plans, Mthembu said: “We have the power to do that but we want to work with the institution first … In this case, the City has been coming to the party but they need to think about sustainability.”

But, he said, it was something to consider as the “sanitation in the province was becoming terrible”.

The inquiry continues on Thursday.