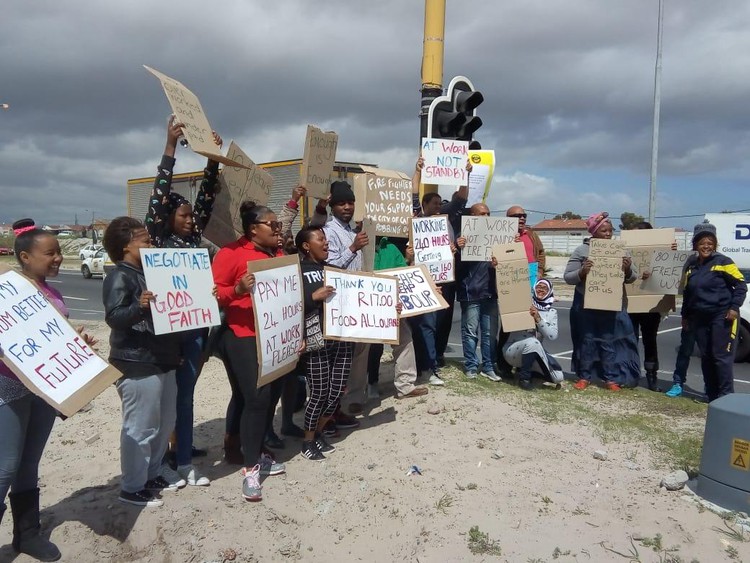 About 25 off-duty firefighters and community members held a picket on Stellenbosch Arterial Road outside the Belhar Fire Station. Photo supplied

About 25 off-duty firefighters and community members picketed on Stellenbosch Arterial Road outside the Belhar Fire Station on Wednesday. They were demanding better pay for firefighters.

A learner firefighter said, “Our job is to serve the public and we often face injuries and assault. We deserve to get paid what is owed to us”.

A community member told GroundUp, “We are here to support them because their jobs get threatened when they speak out.”

Firefighters say they are at work on 24 hour shifts, or 240 hours a month, but are only paid for 160 hours. Eight hours of each shift are not paid, though they have to stay at the fire station.

Picketers said they do receive an allowance of 35% (of the monthly wage) for the hours of work that go unpaid. But, they said, people who did not work the extra hours also got the allowance. “Is that fair?” asked one of the picketers.

The City of Cape Town said “negotiations are currently proceeding” and it “cannot comment further until a resolution has been achieved”. The City said salaries were “commensurate with seniority, length of service and varies according to the individual”.

Picketers also complained about slow advancement and promotion problems for women and black firefighters. “There are learner firefighters with ten years of experience who haven’t advanced,” said one picketer.

The City said it was an “equal opportunity employer”. “Advancement is via a fair and open process”.

Executive Director for Safety and Security for the City, Richard Bosman, said, “We are currently engaging with personnel through their trade unions on the matter in order to reach an amicable resolution.”