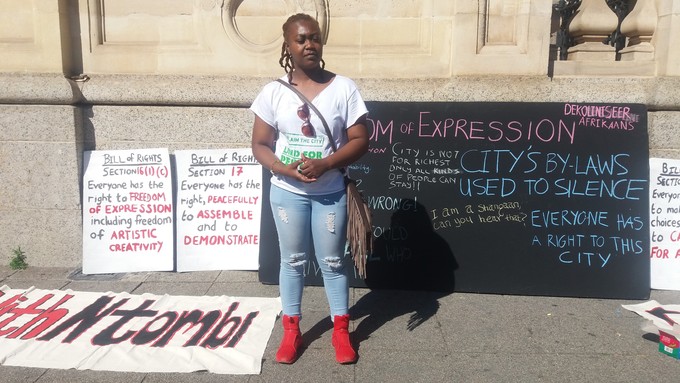 The City of Cape Town has withdrawn charges against Ndifuna Ukwazi organiser Ntombi Sambu in terms of its graffiti bylaw.

Sambu was fined R1,500 by City Law Enforcement Officers after she drew a chalk mural along the Sea Point promenade in June, in support of Ndifuna Ukwazi’s “Reclaim the City” campaign.

Last month, Sambu filed a complaint with the South African Human Rights Commission against the City, claiming that the fine infringed on her and other residents’ constitutional rights to freedom of expression and peaceful assembly.

Sambu said when she arrived with her lawyer at the Cape Town Municipal Court today they were told the charges against her had been withdrawn.

About 30 Reclaim the City supporters picketed at the Cape Town Municipal Court in support of Sambu.

Ndifuna Ukwazi communications officer Daneel Knoetze said the withdrawal of the charges was “a victory for freedom of expression”.

Sambu, who lives in Khayelitsha, said her wish was to live close to the city or in the city centre because she struggled daily to commute to and from work.

“I have two boys aged six and eight. I leave home early before they are finished with their school preparation. In the evening I am not available to prepare meals and help them with homework. My time is spent queuing for taxis and commuting in heavy traffic to and from work.”

“It’s not just me. Many of our parents are domestic workers and security guards, they are struggling.”

Sambu said she knew of a 14-year-old boy from Mfuleni who woke up at 4am to commute to school in Sea Point but still arrived late.

She said instead of selling inner-city land and evicting people from the city to areas like Blikkiesdorp, the City of Cape Town should start building houses for low income earners.

A University of Cape Town politics student and member of the District Six working committee, Yameen Motala, 19, who was among Sambu’s supporters, said his area, Walmer Estate-Zonnebloem, had changed over the last five years as rents rose.

“People are kicked out for not [being able to] pay high rentals and [they are] moved to Delft. All the culture of closeness is disappearing.”

At the time of publication, the City had not yet commented. Comment will be added when it is received.