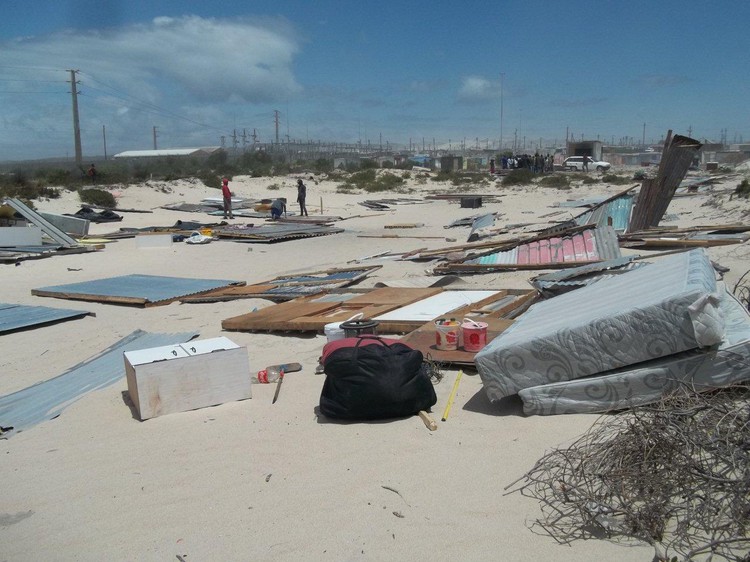 Debris and goods lie about Zweledinga informal settlement after the City of Cape Town demolished shacks on the weekend. Photo: Vincent Lali

The City of Cape Town has refused to say how many shacks were demolished in Zweledinga informal settlement in Khayelitsha at the weekend.

Asked by GroundUp how many shacks had been demolished on Saturday and Sunday, councillor Malusi Booi, Mayco Member for Human Settlements, said: “This is operational information.”

“The City condemns land invasions on both private- and City-owned property because these actions are illegal and consequently impact on service delivery to other residents,” he said.

Booi said the City had a court order allowing it to remove the land occupiers.

When GroundUp visited the informal settlement after the first demolitions on Saturday, the shack-dwellers’ belongings and building materials were scattered around the vacant land.

Some were busy collecting their building materials and preparing to rebuild their shacks.

Community leader Sizakele Dyani said the residents were former backyarders from various parts of Khayelitsha. “Some residents have been on the housing waiting list for ages,” he said. “They occupy the land in the hope that the City would move them to serviced sites in future.”

Dyani said the families had started moving onto the land in September last year.

He said the officials had not shown the shack-dwellers any court order allowing them to demolish the shacks. “They didn’t even bother to talk to us. They just destroyed the shacks and left.”

Anna Mango said she was bathing in her new shack when the officials burst in carrying crowbars. “When they ordered me to vacate my shack, I asked them where they expected me to stay. They said they were carrying out orders,” she said. “I cried but they showed no pity.”

She said she had moved on Friday from Green Point, where she had rented a backyard shack for R450 monthly. “My landlord told me to leave his place because he wants to extend his house,” said the mother of two. “My kids are gutted because they were happy to have a place they could call home.”

The officials had spoiled her groceries and damaged her cupboard, fridge, windows and a stove, she said.

Mango, who sells sweets for a living in Site C, Khayelitsha was planning to rebuild her shack.

Pretty Stofile also moved in on Friday. She had been staying in a rented shack with her sister and her two kids in nearby Zwelitsha informal settlement. The officials arrived while she was busy spreading out a carpet in her shack and told her to leave, she said. “I asked the officials to allow me to collect my kid’s medications before they destroy my shack,” said Stofile, “but they told me stand far away.”

Stofile drives pre-school children to local crèches with a hired white Nissan to earn her living. Sometimes the parents don’t pay, she says. She decided to move onto the land after she failed to pay rent on her Zwelitsha shack for four months. “My landlord grew impatient with me. She doesn’t understand why I’m broke while I drive a car every day.”

Stofile showed GroundUp a gash on her left leg. “The wind blew my zincs away. One of them cut my leg while I was trying to collect them,” she said. 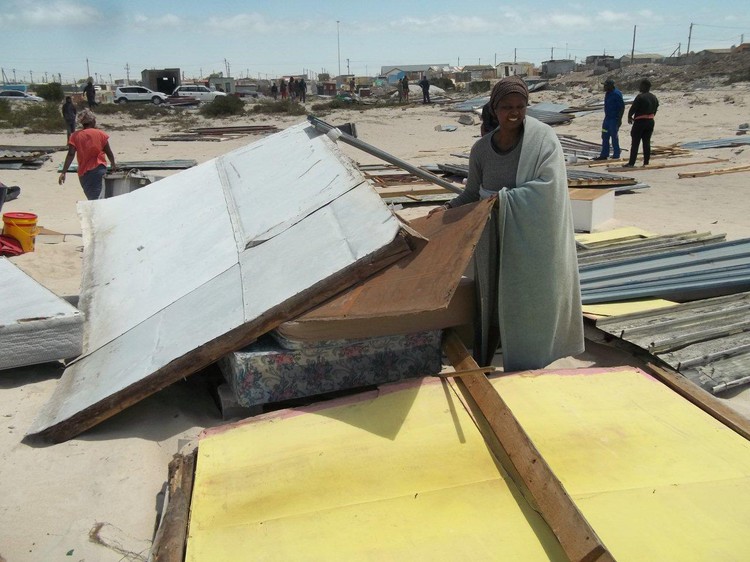 Nomnikelo Limane (42) said she moved here to save R500 a month on rent. She would rather use the money to food, stationery and school uniforms for her children. Photo: Vincent Lali

Nomnikelo Limane, who also sells sweets and chips for a living, said she and her husband and three children had rented a shack for R500 a month in Makhaza before moving to the vacant land on Friday. “If I stay here,” she said, “I will use the R500 to buy my kids food, stationery and school uniforms.”

“I want to have my own place where I can raise my kids,” she said.

Her husband works as a cleaner for about R2,000 a month in Century City.

“I will rebuild the shack because my landlord already rents out his space to someone else,” she said.

“The City’s Anti-Land Invasion Unit removes unoccupied and unfinished structures in line with the provisions of the law and based on advice from legal professionals,” said Booi. “The City will take all lawful measures at its disposal to protect its land. As the owner of the property the City has a right and is entitled to ensure that the property is not unlawfully occupied.”

“When land is invaded or when attempts are made to occupy land, we move backwards rather than forward. The City will continue to protect land from being invaded. Land invasions affect us all,” he said.