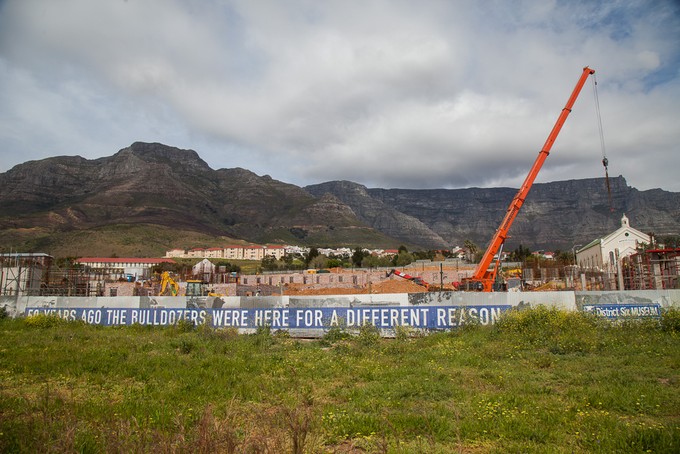 The City of Cape Town has secured a final interdict preventing any further unlawful occupation of parts of District Six.

In terms of the order granted by Judge Judy Cloete in the Western Cape High Court, City officials have been given the authority to remove any person who attempts to occupy the properties, to demolish any incomplete structure that is not occupied, and to remove any possessions, including building materials.

However, the order states that it is not an “eviction order”, and the City is not entitled to demolish occupied structures.

The City first obtained an interim interdict in May in order to protect the properties, which form part of an ongoing land restitution process. Some 60,000 people were forcefully removed through the Group Areas Act during the apartheid years.

In the late 1990s, through the restitution project, 2,670 claims were submitted, 1,439 chose financial compensation, and 1,126 chose to return to District Six.

Two phases have been completed and a third, with 108 dwellings, was scheduled for completion at the end of May. The restitution process should be finally completed by 2024 at a cost of R1.87 billion.

Judge Cloete said the unlawful occupation of some of the properties was now putting the rights of claimants – who had already suffered atrocities under an oppressive regime – at risk.

She said the purpose of the interdict was to prevent further unlawful occupations.

On three of the properties in Hanover Street there were presently 28 tents and one wooden structure, and another was being used as a base upon which building materials were being placed unlawfully.

The City had, since March this year when the first people began erecting tents, tried to stop the land occupation, but in late April a group of about 150 people, mainly women and children, apparently affiliated to “Heideveld United”, arrived with two delivery vehicles loaded with building materials.

While law enforcement officials were dealing with the drivers, the group erected a wooden structure and used women and children to block access to the property by City officials.

When officials were finally able to get on to the property, they observed that the structure, although incomplete, was occupied by an elderly woman and a number of children. She said she was now living there, meaning the City would have to adhere to the provisions of the Prevention of Illegal Eviction From and Unlawful Occupation of Land Act (PIE).

Subsequently there were other attempts to occupy the properties.

In her ruling, Judge Cloete said even though the occupiers may have complaints about the manner in which the City is delivering housing “they are not entitled to take the law into their own hands”.

“In our constitutional democracy, rights come with responsibilities. For the respondents to use women and children to attempt to achieve their personal goals is shocking.

“One can only imagine the trauma that those children have been subjected to and one does not know whether the elderly woman who is now caring for them has herself been subjected to threats and intimidation and left without a voice.

“Moreover there are no services and the conditions are exposing them to disease.”

Judge Cloete said the City had no obligation to engage meaningfully with those who use land occupations to secure tactical advantage.

“The rights of the lawful District Six Claimants must be protected. It is a reality that the City does not have the resources to patrol the properties constantly.”

The judge noted that this was not the only land occupation the City was dealing with. “If these are allowed to continue, the District Six claimants will be dispossessed for a second time. The only difference is that this time around it will be as a result of the unlawful actions of their fellow citizens and not the disgraceful apartheid regime.”