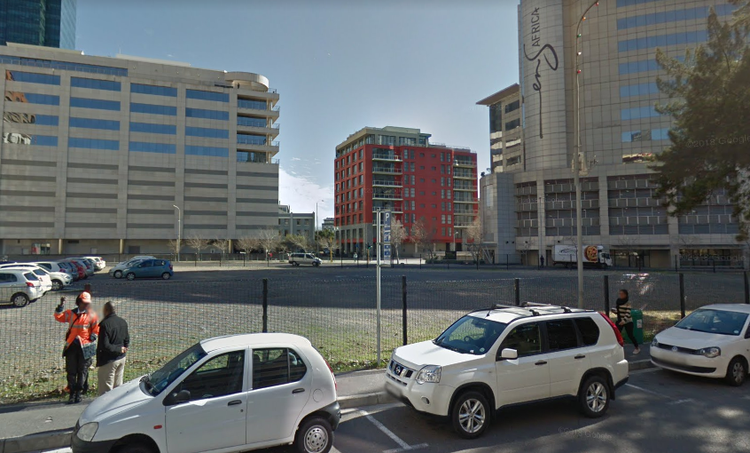 This is the property on the Foreshore that the City of Cape Town sold to Growthpoint. Photo from Google Streetview

Deputy-Mayor Ian Neilson has defended the City of Cape Town’s controversial sale of Site B – a prime Foreshore property. But Neilson’s statement is inconsistent with municipal laws.

Last week, GroundUp reported on an apparent valuation blunder which saw the City sell Site B to property giant Growthpoint for much less than its market value. According to a calculation based on the size of the development that Growthpoint intends to build on Site B, the plot is worth up to R227 million, and not the R86.5 million at which it was sold. That difference relates to the maximum combined floor area that a high rise building on the site may occupy. Auction documents incorrectly stated that the maximum floor area was 17,500m2, when in fact it was 46,000m2. (This is a slight simplification. Interested readers can read last week’s article for the details.)

The City’s mistake was first picked up by Ndifuna Ukwazi (NU), an NGO which advocates for affordable housing in or near Cape Town’s city centre. NU said that the sale amounted to a “gift to one of the most profitable companies on the JSE” and blamed Neilson and his team. At the time of the sale in 2016, Neilson was the Mayoral Committee member for Finance who oversaw the City’s property sales.

But, responding to NU some days later, Neilson disputed claims that the City had made a mistake. He said that Growthpoint only had rights to develop 17,500m2, although he did not address the fact that the figure was based on an outdated and defunct document.

Neilson’s statement then went on to say that additional rights for developing a larger floor area on Site B were potentially available, but that Growthpoint “would have to purchase [those rights] from the City in terms of the Municipal Asset Transfer Regulations (MATR)”.

But the MATR regulates the selling of properties, not development rights, by a municipality. Development rights fall within the domain of the City’s own Municipal Planning Bylaw - which makes it clear that a landowner may only develop land in accordance with a zoning scheme or when approval is granted by the City. There is no mention that such an “approval” would be based on purchasing additional rights.

In short, it is the zoning scheme that defines what development rights a landowner has, and this has nothing to do with the price paid to the City when the property was sold. It does not appear to be possible for the City to withhold “ownership” of development rights, once a site has been sold.

GroundUp sent a media query to Neilson, and asked him to clarify his claim that Growthpoint would have to pay the City if it hoped to access development rights over and above the 17,500m2 that it had apparently paid for. GroundUp also asked Neilson to confirm that the 17,500m2 figure originated from a mistake in the auction documents for Site B.

The City’s media office asked for a 24-hour extension to source a response. Yet, when a response came it addressed neither of these questions. Neilson simply said: “The City of Cape Town is currently engaging with Growthpoint on this matter and therefore is not in a position to comment at this stage. We will be able to provide more clarity in due course.”

This echoed a response sent by Growthpoint on Monday, in which the company also declined to respond to direct questions about Neilson’s statement. GroundUp asked Growthpoint whether it agreed with Neilson’s conclusion that it had to pay extra if it hoped to access the 46,000m2 floor area that it had requested in its development application for Site B. Nadine Kuzmanich, Growthpoint’s Head of Marketing and Communication, said that the company was engaging directly with the City on its vision for incorporating Site B into a precinct along with two neighbouring properties.

Ndifuna Ukwazi however questioned why the City would not advertise a property at its full developments rights and called on Neilson to justify his statement about selling additional rights after the sale. “If he can’t then we would argue that he must admit that under his watch, the City lost up to R140 million. If this is the case, the City Manager needs to initiate an investigation urgently. ”

Disclaimer: Daneel Knoetze worked for Ndifuna Ukwazi until June 2017. He is currently a freelance journalist and no longer has any affiliation to Ndifuna Ukwazi.

The evidence shows that the City of Cape Town sold the Site B property on the Foreshore up to R140 million below market value. It is a good thing that Ndifuna Ukwazi has taken on the role of a watchdog that oversees large property sales in the city. This is likely to serve Cape Town’s residents well.

Mistakes happen, although this is a particularly expensive one. The question now is what to do about it. It is in the best interests of Cape Town that Growthpoint does in fact develop the full 46,000m2 it has applied for. Densification (building higher on already developed property) rather than suburban sprawl is generally a better way to manage Cape Town’s growth. But, this must happen in a way that makes Cape Town more inclusive and makes life easier for more working class people.

A good solution to this debacle will be for the development of Site B to include a large social housing component, ideally based on subsidised rentals.