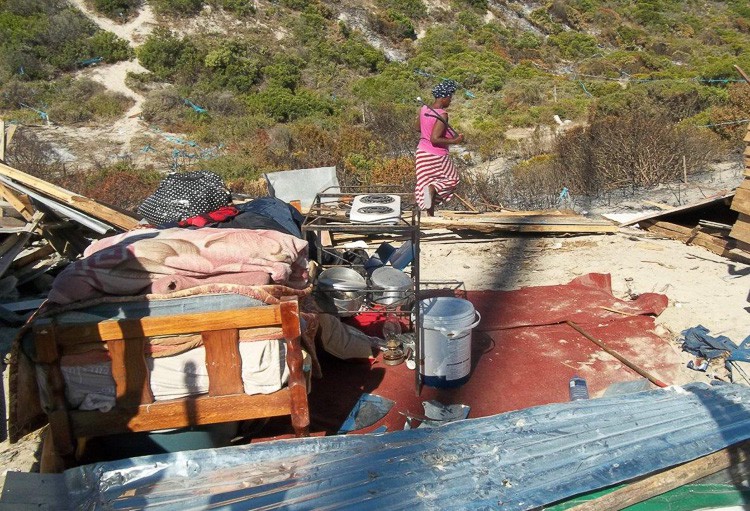 Residents’ belongings were left in the open after their shacks were destroyed on Monday. Photo: Vincent Lali

The City of Cape Town has moved against Zwelitsha residents who erected shacks on municipal land last week.

The homeless residents, mostly backyarders, had cleared bushes and built their homes on the empty land. But on Monday members of the Anti Land Invasion Unit moved in and destroyed the shacks.

“They should have told us to remove our shacks ourselves instead of destroying them,” said Nomfundo Bhadeli, 26.

“If they had told us in advance that they would destroy our shacks, I would have dismantled my shack properly and set it up in a backyard elsewhere.”

Interviewed on Monday, Bhadeli, who moved into her new shack a week ago with her five-year-old daughter and her one-year-old son, said she had no place to stay after the demolition of her shack.

“I don’t know where I will sleep today,” she said.

Bhadeli said members of the unit had thrown away her paraffin and destroyed her teacups and her stove.

Nosihle Somdaka, 34, said members of the unit had not told her to remove her shack before they demolished it.

“Normally members of the unit write with red paint on your shack and say remove it before a certain date otherwise they will demolish it. In this instance they just demolished our shacks without prior warning. Where will our kids sleep now?”

“That we stay in the bushes should have made the City feel for us and realise that we are poor. Rich people don’t stay in the forest,” said Somdaka.

She said the members of the unit had destroyed her food, leaving her with nothing to eat.

She said she would have to borrow money from local loan sharks to buy building materials.

Pregnant Nonyameko Mqikela, 27, said she was lying in bed when members of the unit burst into the shack. She had moved in last Friday.

“They stormed into my shack and pushed me out before they tore it down,” she said.

She said she had lost her building materials and groceries during the demolition, which took place while her husband, a construction worker, was at work in Bellville.

“I have no money to buy building materials to rebuild the shack elsewhere.”

“We were so desperate to find places of our own that we cleared up rubbish, bushes and trees before we placed our shacks here,” she said.

Tywala said she was worried that her former landlord would not welcome her back in his yard.

“I owe my landlord money for rent, so he won’t allow me to return to his place without the money,” she said.

Mayoral Committee member Councillor Anda Ntsodo said members of the Anti Land Invasion Unit had warned the residents against invading the land before demolishing their shacks.

“A verbal warning was given to the invaders during the past weekend while the illegal invasion was in progress,” he said.

Said Ntsodo: “The City is obliged and has a duty to protect City-owned land from illegal occupation.”

Members of the unit had removed 30 shacks, he said.