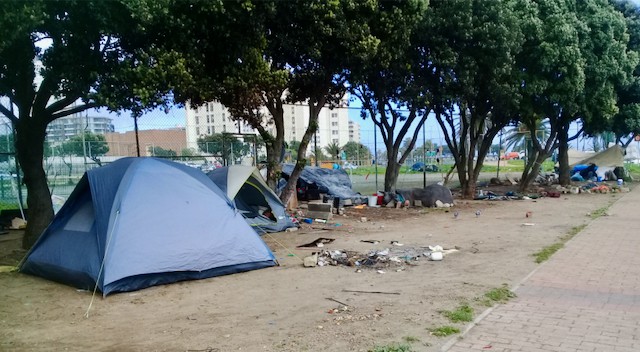 The City of Cape Town has defended its demolition of a tent camp on 23 August that had been set up by homeless people near the Green Point Tennis Club. Photo: Marecia Damons

The City of Cape Town has defended its demolition of a tent camp set up by homeless people near the Green Point Tennis Club.

On 23 August, more than 20 people living in tents and informal structures were forced to vacate the area by law enforcement officials. It left the group without shelter and their tents damaged or confiscated.

Ndifuna Ukwazi (NU) Law Centre took the matter to court on an urgent basis making an application to direct the City to return the confiscated belongings. The City agreed to do this on 27 August, and it filed an answering affidavit the following day.

But NU also wants the court to declare the City’s actions breached constitutional rights and were not in line with the Prevention of Illegal Eviction From and Unlawful Occupation of Land Act (PIE Act).

The matter was heard before Acting Judge Tessa le Roux in the Western Cape High Court on Friday.

Advocate Roseline Nyman, for the City, said the occupiers were served three times with notices to vacate the area – on 28 January, 23 March and 16 August.

“The occupants knew that their occupation was unlawful,” Nyman told the court.

They were also served compliance notices for intentionally blocking or interfering with pedestrian and vehicular passage in a public place, and for failing to comply with lawful instructions under the municipal by-law relating to Streets, Public Places and the Prevention of Noise Nuisances.

Nyman said the City had taken a “three-phased approach”. A compliance notice is served and the person is given the opportunity to remove their structure. The provincial Department of Social Development (DSD) offers to relocate them “to a place of safety”. If the person fails to comply, a fine is issued. If the person still fails to comply, the City’s Displaced People’s Unit (DPU) will then “clean the area of all items dumped, stored, and accumulated”.

Nyman said that hours before the eviction, officials gave the occupiers an opportunity to remove their tents. The provincial DSD offered to relocate them to the City’s Safe Spaces at Culemborg, Bellville and the Haven Shelter.

She said this offer was rejected. Instead, individuals wished to be accommodated at the Greenpoint Bowling Alley, Wynyard Mansions and Green Point Stadium. These were unavailable according to the City.

The City applied the by-law in the proper way and the PIE law was not applicable in this case, said Nyman.

Advocate Ranjan Jaga, for the applicants, argued that under the Constitution no one may be evicted without a court having considered all the relevant circumstances and issued an order. Jaga argued the City had used its by-laws to circumvent constitutional protections and the PIE Act.

“We submit that a by-law can never trump the provisions of the Constitution,” Jaga told the court.

He said the City had also violated the Disaster Management Act regulations which prevents anyone from being evicted during the lockdown period without a court order.

“The City relied on a by-law to dismantle people’s tents in the middle of a pandemic,” said Jaga.

He said the City had also ignored its own policy which stated that “tents will not be removed during the national lockdown”.

Jaga asked the court to declare the City’s actions unconstitutional.