Judge says he wants to know where refugees will be moved 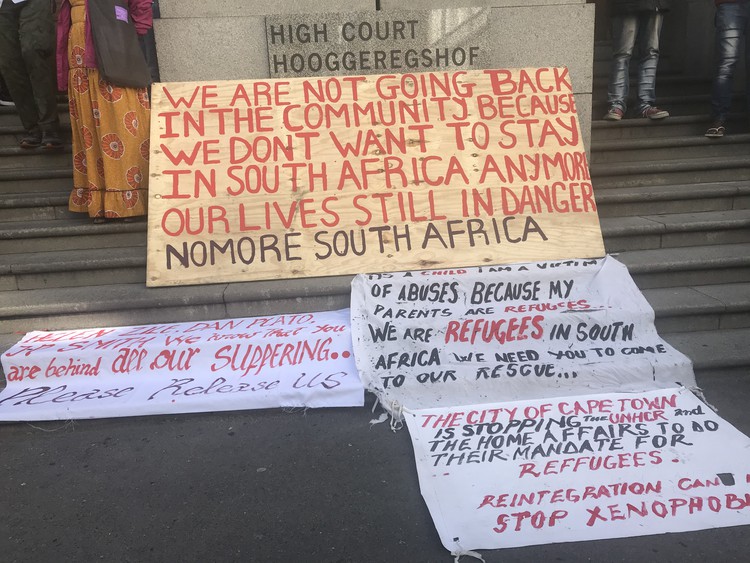 Refugees protesting in Cape Town’s city centre want to be resettled in a third country (not South Africa or their countries of origin). Photo: Tariro Washinyira

The Western Cape High Court on Tuesday heard an application by the City of Cape Town in a case that may determine the outcome of the refugee protest in the city.

Several hundred refugees have been protesting in the city centre for several months, demanding to be resettled as a group in a third country (not South Africa or their countries of origin). They are currently living inside and outside the Central Methodist Mission on Greenmarket Square.

The City applied to the court on 9 December for an interdict to prevent the refugees disregarding health and safety by-laws. If granted, the interdict would prevent those seeking refuge at the church from urinating and defecating outside, washing clothes outside, and making fires and cooking outside. The City also wants the refugees to refrain from intimidating, threatening, and harassing its officials.

Judge Daniel Thulare heard argument from the City, the Department of Home Affairs and the refugees in a packed courtroom. He reserved judgment and has given the City an opportunity to present him with a draft order before 17 February.

Counsel for the City, Con Joubert, accused refugee leaders of harassing City officials who visited the church to carry out their duty. He also said the protest was causing people to lose business.

The City application, if granted, may allow officials to remove the refugees from the Greenmarket Square area. So Judge Thulare wanted to know what would happen to the children and women in that case. “Since October people have been staying there. If I say remove them, don’t I deserve to know what is going to happen to them? My understanding is that according to the City it is none of their business.”

Joubert replied: “The issue of temporary accomodation only arises when people are homeless. … The case has never been about providing alternative accommodation.”

Home Affairs and the City have been at loggerheads throughout the case. At issue has been how to verify the immigration status of the refugees and where to do it.

Counsel for Home Affairs, Advocate Seth Nthai, told the court: “A large number of the group is documented; only 68 people are not documented. But the City’s stance has been arrest and deport them. A person cannot be deported back to his country if he is running away from persecution.”

Jean-Pierre Balous from the DRC, one of the leaders of the refugees, represented them in court. He told the judge that bylaws could not be used to suppress the Constitution. He said that every human being has a right to respect and dignity. Responding to statements by the City that refugees had intimidated City officials, Balous told the court, “Being a refugee doesn’t make one stupid. My people have never intimidated anyone. We have women and children staying inside the church; we cannot let people enter as they please. Even the president of South Africa has to state his business if he visits the place.”

The refugees held a protest outside the court when the day’s proceedings were finished. Then, marching through Cape Town, they chanted: “No more xenophobia”, “Refugees are not criminals” and “No more racism.”