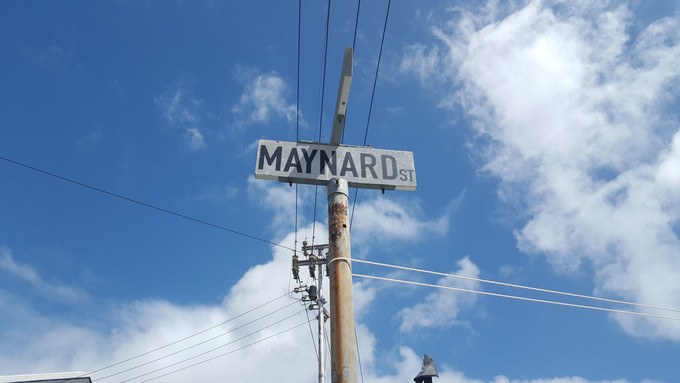 Tenants of City-owned houses in Maynard Street in Cape Town’s City Bowl fear they will have to move out of homes they have lived in for decades. Photo: Mary-Anne Gontsana

Tenants in Maynard Street in Cape Town’s city centre — some whom have been living there for 34 years — are faced with uncertainty after coming across a notice in local newspapers saying their city-owned properties are “proposed for disposal”.

The notice, which appeared in at least two newspapers (Cape Times and Die Burger) in November 2015, lists 12 properties that the City of Cape Town is considering selling for “residential use”.

One resident “accidentally” saw the notice in the Cape Times on 27 November and informed other residents. They asked the City what was going on. Three days later they were sent letters confirming the notice and saying they would be “duly notified in early 2016 with more information”.

Maynard Street tenants’ spokesperson Jerome Izaaks, who has been living in one of the properties for the last 14 years, said “After we saw the notice, we all panicked.” He describes how one upset twelve-year-old tenant asked, “What are we going to do? Where are we going to move to?”

GroundUp has a copy of a letter sent to a tenant dated 30 November 2015. It is written in language that is very difficult to understand:

“This notice serves to inform you that the City has finalised their investigation regarding the de-proclaimed properties of the Maynard/Canterbury Road Scheme. An advert was placed in the Cape Times and Die Burger which states, that the City is considering disposal by way of sale of the City’s Properties for Residential Use.

This property forms part of the proposed disposal list. You will be duly notified in early 2016 with more information.”

The history of housing in the area is confusing, and the current arrangement appears to go back to the 1970s. On one side of the road are mostly tenants, a mixture of coloured and white people both working and middle-class, some unemployed, others not, several elderly. On the other side are home owners. There was at some point, many years ago, an intention by the City to demolish the houses in order to widen the road, but this idea was abandoned.

Janin van Niekerk has been a tenant of the City in Maynard Street for 25 years. She says that more than 15 years ago she signed a three-year lease with the City, but hasn’t signed anything since then.

“We’re on the fringes of District Six. This [area] was just saved from the District Six bulldozer, but what they [are] doing is a fancy bulldozer in my opinion. They are bulldozing us out of our houses. This street is a community that has been here for ages. We get along with the private property owners. We are not a problem. The only problem they have with us is the condition of our houses because that brings their property value down.”

Both Van Niekerk and Izaaks complained about the City failing to maintain their houses. Van Niekerk says, “It’s pretty clear that the council can’t handle these houses. They don’t have the staff. So this condition we’re staying in is very discouraging because we don’t have security of tenure, so we don’t feel that we should invest more money in repairing. I’ve fixed my roof three or four times already, cheap jobs, because every year I think I’m moving out.”

Hester Capes (34), who has lived in Maynard Street all her life, says what the City is doing is unfair. “What about us? We’ve paid rent, rates, water, electricity. So why put us out? So that they can make more money? If they can’t maintain the properties, then they must tell us and make us an offer. Sell us the houses. … We have been asking them to come and fix our walls for the last six years. They are damp and they look like they will fall over.”

Capes has a problem with beetles eating through the floorboards of her house.

The tenants sent a letter to the City in December asking for an option to purchase directly from the City. They also asked the City to carry out the sale of the properties as part of “Affordable Housing, GAP housing or RDP housing”. These are state programmes for selling property for low-income areas. The letter reminds the City that Maynard Street was declared an urban conservation area.

The letter warns the City of the tenants’ various legal rights and notes that the properties have not been maintained by the City.

Interestingly, Izaaks sent the City a letter in December 2006 expressing his desire to buy his house. He got a rejection letter in April 2007, also written in difficult-to-understand language, stating that the property “is currently zoned Proposed Street Purposes and forms part of the future Maynard-Canterbury street scheme.”

“Are we going to become the next backyard dwellers? I’m just asking,” said Izaaks.

The City’s Executive Deputy Mayor, Ian Neilson, said none of the houses had been “disposed” of yet and no date had been set yet to do so. He said a public participation process was underway and that notices had been sent to all tenants. “Due process is being followed,” he wrote in an email to GroundUp. “The properties will remain residential properties,” he said.

Asked if the City was considering providing the residents alternative accommodation, Nielsen did not respond directly but did say, “[T]hese properties were never part of the City’s social housing system.”

Asked whether residents would get first option to buy, Neilson said there were strict legal requirements the City had to follow and nothing could be confirmed yet.

With regard to the lack of maintenance, Neilson said “The lease agreements place the responsibility of internal maintenance of the property on the lessee.”